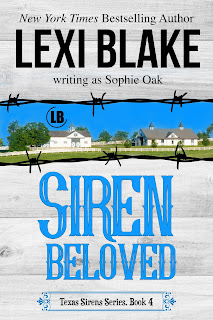 The Texas Sirens series has been consistently entertaining to read, but this fourth re-release is, hands down, a cut above the rest. Penned by bestselling author Lexi Blake under the nom de plume Sophie Oak, Siren Beloved is a second chance M/F/M romance featuring characters that were earlier introduced in the series, but this can still be read as a standalone. It wasn't all that long ago that Lexi Moore was happily engaged to Aidan O'Malley and had the best friend anyone could ever ask for in Lucas Cameron. But one night of shared passion had Aidan running as far away as he could from both Lexi and Lucas, breaking off his engagement with Lexi and basically making it clear he was disgusted by everything that had happened. Fast forward two years later, Lexi and Lucas have moved on with their lives, engaging in the lifestyle that they both desire, if only both of them can admit that there's something--someone--missing in the equation. They've both tried to be what the other needs, but it isn't until a person from their past returns that they consider that all three of them may get the second chance they hoped for.

These three main characters mastered--pun not intended!--just how alluring the right kind of tension can be for a reader, but then they were created by Lexi Blake, and if you've read her novels before, you'll know what I'm talking about. Lexi, Lucas, and Aidan had issues to overcome, especially when it came to trust, and I was just glad that there were no easy fixes. I know that may sound weird, but I'm not a fan of second chance love stories where one main character re-appears and then everything that's happened is swept under the rug and they go on as if nothing broke them apart in the first place. I need the tension and anxiety because it makes for a far more interesting read, and this book certainly had both plus a whole lot of romance and sex and even some suspense. We've got cameos from the other trios in the series, with quite a few of the individuals playing pivotal supporting roles to get Lexi, Lucas, and Aidan's second opportunity to finally get things right a push in the right direction. Lexi Blake's Texas Sirens is a decadent reading addiction I just can't get enough, and I'm giving Siren Beloved five stars. ♥