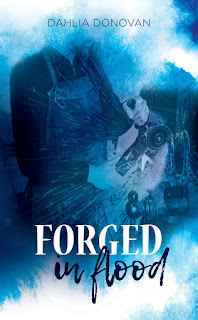 Note: An advanced reader copy (ARC) was provided by Hot Tree Publishing via Give Me Books Promotions.

Friends slash lovers whose lives are forever changed by one night struggle to find their footing when forced to confront all their years apart. Now, this may sound like your run of the mill second chance romance, but Dahlia Donovan's Forged in Flood is anything but that. It was a decade ago that Ivan Black decided to cut any and all ties with Wesley Cook and Rolland Spence, believing this was apt punishment for what happened to all three of them after a night of drinking led to Ivan taking the wheel while Wes and Rolly were his passengers. He's allowed the darkness to take over, and his surly behavior has gotten worse over the years, something his family has taken note of. All his time and attention has been spent on continuing the blacksmith tradition his father and forefathers were involved in. Day in and day out, Ivan's life was about the Boscastle Forge, so when an impending storm--forecast as the worst the area will experience in forty years--threatens, Ivan decides to stay. As the floods rise, the last thing Ivan expects is to be rescued in more ways than one by the two guys who should despise him most--Wes and Rolly.

I've enjoyed the author's work in the past and was looking forward to see how she would do with an M/M/M romance. This was going to be a challenge of sorts, especially since I'm extremely picky when it comes to this particular sub-genre. Donovan's story was a tad different from those I've already read, at least as far as I can remember. Here, the three men were already previously in a relationship and even though it's been a decade since they were a threesome, two of the three were still romantically involved with each other. The story as a whole was interesting to read, but it was paced much slower than I would have liked, and that's saying a lot considering this was novella in length. Ivan isn't exactly the easiest person to like either, not with his constant pushing away of Wes and Rolly and even his own family. I did appreciate the angst swirling in this story, almost all of which were courtesy of Ivan, of course. All things considered, I liked that Forged in Flood was distinct enough for it to stand out, and while it was far from perfect, I love it when an author thinks outside the box. This novella gets four stars. ♥