Review: Ricochet by Reese Knightley (Out for Justice #1) 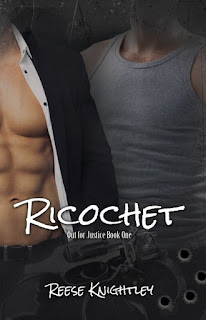 Note: An advanced reader copy was provided by the author via Vibrant Promotions.

Ricochet is the debut novel from Reese Knightley and the beginning of her Out for Justice series. For an initial foray, this was a notably good effort, one that relays a good first story while also introducing readers to other characters that will be featured as the series moves forward. This series starter focuses on Noah Bradenburg and Robert Mackenzie, who are seventeen and twenty-six, respectively, when the latter rescues the former from six years of abuse at the hands of a crime lord and his right-hand man--who just happens to be Noah's stepfather. Needing Noah's testimony and with the boy's stepfather and his stepfather's boss still at large, Noah is placed under witness protection. Even though he's drawn to Noah, Mac must put his job as a US Marshal ahead of his personal desires. When tragedy strikes two years later, Noah's case is passed on to another marshal and Mac cuts all ties with Noah. Five years pass before their paths intersect in the most unexpected of circumstances. Gone is the boy that Mac fell for, and in his place is a man seeking vengeance on those who took too much from him--a man known as "Ghost".

The story itself was fairly impressive and it sets up an ambitious story arc that I suspect will run the length of the series. The idea of Noah and Mac already sharing a connection but not being able to do anything about it because of the nine-year age gap and the fact that Mac was tasked to protect Noah made for a good start. I liked the suspense thriller aspect of the story a tad more than the romance, and that's mostly due to a lot of time passing wherein Noah and Mac weren't even in each other's lives nor did they really have any opportunity to be together. There were a couple of jumps in the timeline that also contributed to the lack of back story as to what was brewing between them while they Noah was under Mac's protection for two years. The writing itself was okay, although I think that some polishing could have benefited it, especially given that there's a part where Noah suddenly goes from warily quiet to flirty and then using a pronoun without the reader immediately knowing who between Mac and Noah it's referring to. Hiccups aside, I'm curious enough to continue on with the series. 3.5 stars for Ricochet. ♥

Side Note: The blurb for the book starts off by calling Noah a "WITSEC victim", which basically makes him sound like he had been victimized by the government agency, which he wasn't. He was a witness with WITSEC, not a victim.