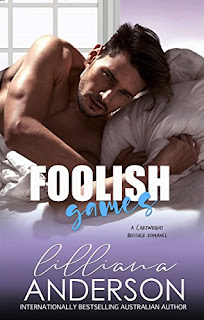 “Crazy together forever, huh?” I whispered, too afraid to give volume to my voice in case it made me think too hard.

“Yeah.” And I did know. This past week had been the first week in my life where I actually wanted to remember every detail. “But am I supposed to be afraid?”

He let out his breath. “You're supposed to be terrified.”


With Fool Me Twice, I adored Holland Cartwright, née Williams but had love-hate thing going on with Nathaniel Cartwright. On the other hand, I liked Samuel Cartwright but struggled with what I thought of Alesha Cartwright, née Ward, in Fools Rush In. However, when it came to the third Cartwright Brothers novel, well, there was no resisting the youngest of the brood and the feisty thief who challenged him. He saw her as a nuisance who took pleasure in abusing his precious Ute, and she saw him as the bane of her existence, blaming him and his family for her current state of homelessness. There's a whole lot of hate and revenge while foolishly falling in love.

When thirty-three-year-old Kristian Cartwright catches twenty-seven-year-old Veronica Sutton defacing his Ute, it's the final straw. He takes her in--not to the authorities, but to the home he shares with his twin brother Abbott. Kris fully intends to make Ronnie earn the money to pay for repainting his Ute. Whether it be cleaning the house or mowing lawns with the twins, Ronnie still can't believe she's got Kris watching her every move and making sure she stays right where he can always see her. You'd think she's on the losing end, but this is the first time in a long while where she's got a place to lay her head regularly. But how long can it last when there is no honor among thieves?

One of my favorite things about this story was how Ronnie gave as much as she took from Kris and vice-versa. There wasn't a whole lot of pussyfooting or trying to ease the other person into something. With these two, there was a lot of push and pull but not the frustrating sort. They were both ready for a change in their respective lives, although not the kind of change that meant an overhaul of who they essentially were. Being in one another's life and presence made them open their eyes to the possibilities of finding someone who absolutely got them and didn't make demands that they alter the very heart of them. These two clicked even when they hated each other.

Another thing I loved about this third Cartwright Brothers novel was how we got to know the Cartwright family members whose stories haven't been told yet. I wasn't a fan of family matriarch Jasmine but I was allowed to see her in a whole new light her and appreciated her motivations for doing what she had to for her sons. I've got my fingers crossed that her story with a certain biker is told, even in novella or short story form. And I know that Abbot's story is up next, but I must confess that eldest brother Toby is the one I'm most curious about. With how he constantly puts his family's well-being first, I hope Toby's happy ending is epic. Five-plus stars for Foolish Games. ♥

Read my reviews for the Cartwright Brothers series:

Fool Me Twice (book one) - five-plus stars - My Review