Review: Beyond the Bases by Kaylee Ryan 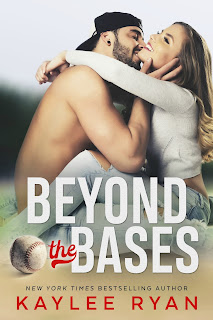 Beyond the Bases is the new standalone sports romance from Kaylee Ryan, and it's got a hot baseball player who could give a lot of book boyfriends a run for their money and a young woman who makes him work for harder than he's ever had to for one female's attention. Twenty-five-year-old Easton Monroe is a star in the sport of baseball, and meeting someone who has no clue who he is is a rarity in Tennessee, which is part of the reason why he's so fascinated with twenty-two-year-old Larissa. She doesn't fall for his charm or his looks and because she doesn't know who he is or what he does, she isn't interested in his money or what he could do for her. She turns him down time and again, but that just has Easton wanting to up his game because somewhere, deep in his gut, Easton knows Larissa is isn't like everyone else. She's the game changer that'll make him want to go far beyond the bases.

This isn't my first Kaylee Ryan read, but it's definitely my favorite one from her so far. While it did take me several chapters to feel any sort of warmth from and towards Larissa (whose last name I can't recall being mentioned in the book), once she loosened up and the reason behind her erecting the wall that she has around her is revealed, it became far easier for me to, at the very least, have a better understanding of why she's as closed off as she is. There's one particular peripheral character who humanizes her, but I can't say how or why because, hello, spoilerville. When it comes to Easton, however, well, let's just say the guy is as close to ideal as a main character can get. He's sweet and attentive and goes above and beyond, not because he's lusting after Larissa, but because he's all in with her. Beyond the Bases was a sweet story with some angst to it, making for a 4.5-starred read overall. ♥

Purchase Beyond the Bases on Amazon | B&N | iBooks | Kobo.