Review: Begin with You by Claudia Burgoa (Chaotic Love #1) 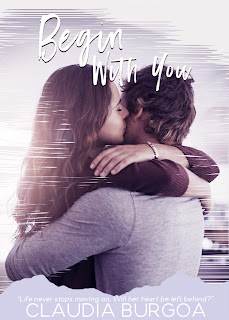 When she was seventeen, Abigail Lyons found herself in front of a mansion in an exclusive neighborhood. There, a foster family awaited her, and the Aherns truly were the ones who would change her life for the better. She had foster parents that cared about her, and she had two foster brothers as well, but it was the elder of the two who would become her best friend--Weston Ahern. Over the next few years, she would pursue her degree and live a far better life than she imagined for herself, but it was Wes who would always remain her touchstone. Back in Colorado, Wes was in closer proximity--this man who went the world to her. He was her brother in name, but there was nothing familial about how she felt about him...and him about her, but that was a fact that Abby wasn't fully aware of. But as well as Wes may know Abby, there are things about her past that she's kept from him, things that she's been trying to outrun for years. Could the time have finally come for her to be rid of her past and take a shot at confessing her feelings to Wes? What happens if Wes rejects her, or worse yet, her past comes to take her back?

There's a reason why Claudia Burgoa is one of my favorite go-to authors: she knows how to come up with a hell of a story worth spending a couple or so hours on. In Begin with You, Burgoa starts off her new Chaotic Love duet with a young woman who seems to have a firmer footing in life, believing she's found her own bit of real estate on this planet and with people who truly seem to want what's best for her. But Abby's life is far from perfect given that she's in love with her foster brother and someone seems intent on reminding her exactly where she came from. There's a lot to like about this novel, with its angsty story line and flawed characters who all have their fair share of baggage. Abby is damaged, but she isn't desperately clinging to Wes or anyone else, hoping to be rescued by some hero with a cape. She's independent and wants to find her own way, which is what makes her as kickass as she is. Wes was a great main character as well, protective but never overbearing. I'm quite intrigued by Sterling, Wes's younger brother, and do hope we see more of him in the future. Begin with You was a 4.5-starred beginning. ♥

Purchase Begin with You on Amazon | B&N | iBooks | Kobo.