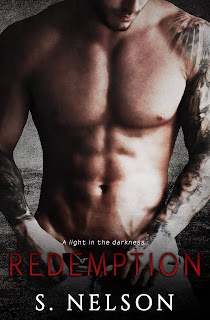 Note: An advanced reader copy (ARC) was provided by the author via the Next Step PR.

Redemption is a re-release from S. Nelson and it's the story of a twenty-five-year-old Lila Stone in desperate need of a job after she's fired from her last one. Almost like kismet, a lifeline comes by way of an older woman who's about to retire as a housekeeper. Her new employer, however, doesn't seem all that thrilled about having her around. Mason Maxwell is surly and demanding, making it very clear to Lila that he has no intention of making her life easy while she's under his employ. But then Mason has his reasons for wishing the young woman away. She's a temptation he doesn't want, especially given the fact that he's got secrets that can never be exposed. The more Lila and Mason are around each other, the more the push and pull, until sooner rather than later, they both break.

This was a curious story in that it felt as if it were your run-of-the-mill tale of an immensely private man who has a woman change his life once she's working for him, but then bits and pieces come out and it goes from an enemies-to-lovers slash boss-employee romance to romantic suspense. Without giving too much away, Mason was forced to make a deal with the devil to protect someone he loved, and Lila's presence and the fact that they're very obviously drawn to each other makes her a potential target. And I'll leave it at that. Whatever his secrets may be will remain exactly that--secrets--until you pick up the book and find out for yourselves. Redemption was a good read, and I'm now curious as to any future spin-offs for certain supporting characters. I'm giving this one four stars. ♥