Review: Moore Than a Feeling by Julie A. Richman (Needing Moore #4) 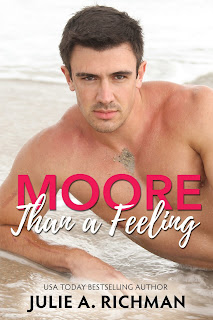 A companion novel to the original Needing Moore trilogy, Moore Than a Feeling is the story of Holly Moore, older daughter of Schooner Moore and stepdaughter of Mia Moore, and Aiden McManus, bartender and soldier. For the entire time they were together, Holly and Aiden were the picture of true love...until that picture was shattered by Aiden's declaration that it would be better for them to end things before he was re-deployed. What made it even more heartbreaking was his addendum that they didn't belong together and that he still had feelings for his ex-girlfriend. Distance and time weren't necessarily making things easier for Holly, but she knows she needs to move on, and move on she does. But when her family seems to be doing its damnedest to sabotage her new relationship, she's at a loss all over again. Finding out Aiden was injured while deployed and is now back and still refuses to have anything to do with her, however, that crushes Holly's spirit. Could their relationship have meant nothing to Aiden, or could his intention have been to make sure that he keep her protected from all his damage?

Part second chance romance, part family dramedy, Moore Than a Feeling was a read that had equal parts hilarity and angst. Schooner and Mia play very prominent roles in this fourth novel in the Needing Moore series, at times even stealing the limelight from Holly and Aiden. There are A LOT of characters that the reader needs to be aware of, to the point that even if you're already familiar with all the names and their significance to the series as a whole, it gets to the point where there's just TOO many of them, each one needing to throw in their bit of history. Then there are new people to take note of, and it starts to get difficult keeping up with who's who and who's doing whom. In terms of the actual romance between Holly and Aiden, well, that was an interesting tale, given that Holly was involved with someone else (and his identity was a doozy!) and Aiden was supposedly with his ex (although I'm not entirely sure if anything was really going on there or if it was all just a rouse). What did steal my attention, however, were the possibilities popping in my head for other stories involving some of the supporting characters, so we'll just have to wait and see what Julie A. Richman has up for us next (although a quick peek on Goodreads has me more than hopeful!). A wee bit cluttered but wholly entertaining, Moore Than a Feeling was a four-starrer. ♥

Purchase Moore Than a Feeling on Amazon | B&N | iBooks | Kobo.