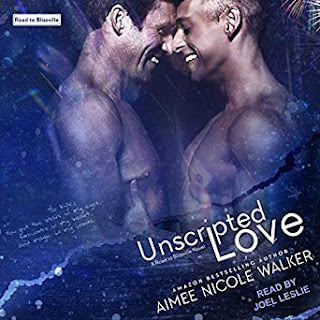 Note: This audiobook was provided by Tantor Media via Vibrant Promotions.

When I originally read Unscripted Love nearly a year ago, there was a slight disconnect on my end when it came to the plethora of characters that were a constant presence throughout the story and that was solely due to the fact that, at the time, I had yet to read the series from which the Road to Blissville books were spun off from. Fast forward just a little less than a year since then and I've managed to not only fall in love with the books that followed this series starter BUT I've also caught up on all things Curl Up and Dye, and I'm happy to say that I had a greater appreciation for Kyle and Chaz's love story the second time around which was penned by the always impressive Aimee Nicole Walker perfectly matched with the narrating goodness of one of my favorites, Joel Leslie.

Thirty-six-year-old veterinarian Kyle Gregory Vaughn may have returned to his hometown of Blissville, Ohio with his then-boyfriend and ready to take over his grandfather's practice. A few years later and the practice continues to flourish but his love life not so much. He's still great friends with his now-ex and even his ex's new partner in life, and he certainly wouldn't mind having that sort of love and permanence in his own life. It's not like he isn't currently interested in anyone. He is. Well, make that two anyones. One's a guy named Drew from Columbus he met on an online gaming community, and the other's someone he sees in the community he lives in, twenty-eight-year-old Charles Bailey Hamilton. Both have gotten a hold of Kyle's attention, but who will grab hold of his heart?

Okay, if you read the blurb for the audiobook, it's easy enough to figure out that it's Chaz and Kyle who are the main couple in this story. How Drew plays into their story, well, you'll have to listen to the audiobook for yourselves, though I wouldn't be surprised if some of you have already guessed the connection. I wasn't a fan of Chaz's while I was reading the book, but seeing him with fresh eyes (or listening to him with fresh ears, as the case may be) allowed me to have a better understanding of him. Kyle was still as great as ever, and Joel Leslie did an amazing job as always giving voice to the, as well as everyone else in Blissville. Having listened to Dyeing to be Loved last year, Leslie's distinction between Gabe Wyatt and Josh Roman there and Kyle Vaughn and Chaz Hamilton here was highly commendable. Combined with Aimee Nicole Walker's fab writing, Unscripted Love gets five stars. ♥