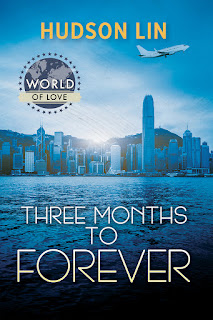 It was true, they did. But was now enough? Was it worth it when Sai knew there might be heartbreak on the horizon? He squeezed Ben in his arms, probably harder than he should have. And when Ben squeezed back, Sai realized those questions were irrelevant because he was already too far gone. If now was all they had, then he would cherish every second of it.

Hong Kong has always been a special place for my family. It was our go-to vacation destination growing up, flying there at least once a year for the weekend or a bit longer from the time I first got my passport as a five-year-old up until 1997, right before the United Kingdom transferred Hong Kong's sovereignty over to the People's Republic of China, although that historic event doesn't really have anything to do with my not having returned to Hong Kong. From the short flight (about an hour and a half) to the mix of cosmopolitan and rustic and the interspersing of modern and historic--and the shopping, one must never forget the shopping!--Hong Kong was a place that had an endless array of offerings to tourists like me and my family. It holds many wonderful memories, and my younger sister and I have plans of one day going back on our own to spend a couple of weeks reacquainting ourselves with the place, exploring Kowloon and Hong Kong sides again, and discovering whatever we've missed in the past two decades. And my love for Hong Kong? Well, I saw it reflected back at me in Hudson Lin's Three Months to Forever.

Twenty-nine-year-old Ben Dutton likes his life in Toronto. His family is close by, he's got a good group of friends, and he's doing well in his job...but he wouldn't mind a bit of excitement either. When the opportunity to be assigned to Hong Kong for three months crops up, Ben jumps on it. A new place, new people, and new experiences are exactly what he needs right now. An unexpected bonus comes in the form of Sai Hei Kwok, an attorney specializing in corporate law but seems to be more suited for human rights law. But while Sai may be gay, he is also very much Chinese, and the dictates of tradition and familial expectation often outweigh the demands of his mind and the yearnings of his heart. Ben's stay in Hong Kong is temporary, a fact that both Sai and Ben are more than aware of from the moment they get together. The possibility of staying longer, however, could very well become a reality--that is, until Ben learns of the medical condition of his father back in Canada. Ben needs to leave and Sai has to stay; is three months of being together enough to make any sort of life-changing decision involving forever?

Maybe my sentimental feelings for Hong Kong had something to do with it, but I can't deny that I absolutely fell in love with the story that Hudson Lin had to tell in her latest release. This is my second read from her, and her ability to create such multi-layered characters and such an interesting story with more than just one complication continue to shine through. Ben and Sai do not merely live in two different countries but the very real distinction between Eastern and Western cultures as well as their upbringing and lifestyles come into play. One of my favorite things about this book, however, was the highlighting of what made these two come together--their similarities and how they may not have made sense to so many yet they made the conscious choice to simply be when in each other's presence. With a backdrop as fascinating and enticing as Hong Kong, two main characters find their footing, direction, and clarity and far more and realize that the possibility of a handful of months leading to a forever kind of love is very much real. An hour and a half led me to a great five-plus-starred read with Three Months to Forever. ♥