Release Blitz: Brave for You by Crystal Lacy 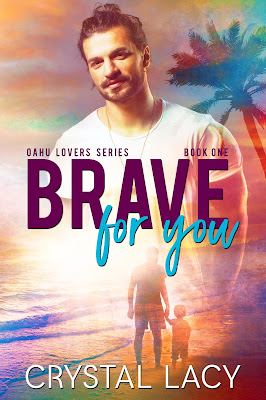 About Brave for You
Less than a year after moving to Hawaii, construction foreman Nate Ellison’s wife leaves him and their infant son for another man. Months into single-fatherhood, Nate meets Andrew “An” Hoang and is slowly drawn into An’s life. Through An’s friendship, he finds himself finally enjoying his new home in paradise.

An Hoang hasn’t had a real relationship in years. With his pediatrics practice and a niece to care for on his days off, he doesn’t have the headspace for more than a simple roll in the sack. But when he meets Nate—who just happens to be the gorgeous construction worker he encountered in the lobby of his apartment building—something about Nate makes it impossible for him not to care. When Nate needs An’s help with his son, An doesn’t refuse.

What happens when Nate’s past and An’s old-fashioned parents interfere just as the two men begin to fall for each other? Will they find the means to be brave and give their love a chance to flourish? 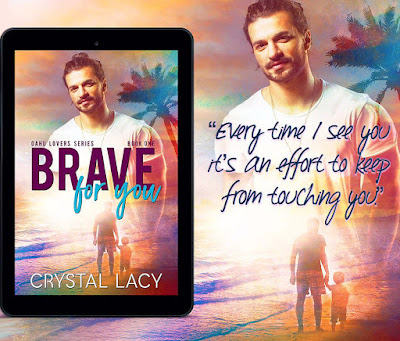 Read my four-starred review of Brave for You.

Add Brave for You on Goodreads. 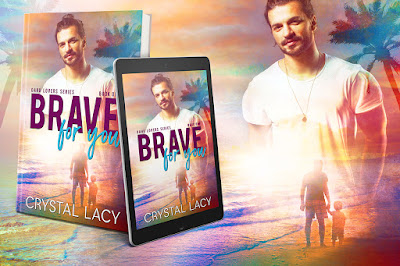 An Excerpt from Brave for You
He stared at the sweet curve of Nate’s lips on his screen and felt his cock twitch in his hand. His other hand must have twitched in response, too, because the very next thing was that he could hear Nate’s voice on the other line, “Hey,” followed by a slower, “Hello?”

An sucked in a sharp breath. He’d answered the phone. Nate was on the phone and An's cock was still hard in his hand. He brought the phone up to his ear, the glass casing cold and slippery against his cheek acting as a welcome shock to his system.

“Hey, man.” Nate’s voice was warm and cheerful, as though he’d been waiting all day to hear from An. An knew that wasn’t a possibility, knew this was probably just how Nate sounded to everyone over the phone, but it didn’t keep his body from responding automatically. His face split into a wide smile and then, An noted rather ruefully, his cock pulsed against his palm.

Picking up the call had been a mistake, and An would have to rectify that mistake any moment now, make some kind of excuse and hang up on Nate. He had been about to seal the deal with whoever it was on Grindr, and he didn’t need to be on the phone with his neighbor at this moment. Not when Nate was only a few steps away. Not when Nate was unavailable.

Tell him you’ll call him back. Hang up.

He cleared his throat, swallowing thickly before speaking. “Hi,” he said, and realized this was a repeat of the last words he’d spoken. Embarrassment, he discovered, did not cause him to lose his erection. “What can I do for you?”

“Oh, I wanted to check if you guys were doing anything next weekend. Going hiking again, or…” Nate sounded unsure. “Am I interrupting something? You seem kind of… Are you sick?”

“No, no. A little cold. I was in the process of getting dressed.” Not technically a lie. It was chilly in here from the central air and he would have to get dressed eventually if he wanted to drive to wherever he was meeting Jay. An forced his hand away from his own cock and ran it through the hair on his head in an effort to calm himself. He needed to focus on the question Nate was asking and not on how intimate Nate’s voice sounded so close to his ear. This was the first time he’d heard from Nate all week, though Nate had left the car on Saturday with a promise to be in touch.

“Dai mentioned she wanted to go down to the Halona Blowhole look-out point,” he managed to say without losing his train of thought. “Walk down to the cove. Swim. Do you know the place?”

“Never been.” Was it wishful thinking or was that hope in Nate’s voice?

“If you’d like to tag along, we could carpool. Perhaps have a picnic. Let the children play.”

“We’d love to, if you don’t think we’re imposing.”

“How could you impose when I’m the one who suggested it? Dai will be very pleased. If there’s nothing else you have planned for next weekend.”

“No. No plans.” Nate’s laughter rang golden over the phone line. “I’m kinda pathetic, aren’t I? Calling you up and forcing you to make plans that include me.”

“We were going anyway,” An lied, feeling touched by the easy vulnerability of Nate’s words. “You didn’t force me, I promise. I’ll text you the details once I find out when we’ll be ready to go. I’m not sure if I’ll have Dai on Saturday or Sunday.”

“Oh, yeah… I’ll let you get back to—to what you were doing.” There was a shyness to Nate’s tone that made An smile, made him pretend that maybe Nate had remembered that An told him he was getting dressed, and maybe that made Nate think about An talking to him on the phone in a state of undress. An reached down again, passing a hand over the hard length of his cock, holding the phone away from his mouth so the quickening of his breath wouldn’t reach the microphone.

“It’s fine.” He spoke a little louder so Nate could hear across the distance of his mouth and the phone. “I’ll talk to you later about next weekend. Or text you.” They said their goodbyes. Nate wished An a “nice weekend” and then the call cut off. An’s display was back on the Grindr chat window.

Show me urs was still the last message on the chat log, right underneath Jay’s dick pic. An swiped up to the camera app. He snapped a quick shot of himself, hard and heavy in his own hand, leaking a drop of clear fluid at the tip. Then he deleted it.

An: Sorry, something came up tonight. Maybe another time. 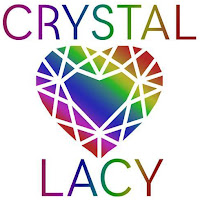 Crystal Lacy lives with her loving family in Hawaii, where it is always either drizzling or sunny and never snows—which is a shame, because she prefers being cold to being damp and hot unless it’s for Very Good Reasons. She writes queer romance, mainly M/M, but also some F/F. She has aspirations to one day write a YA novel about cats.

Crystal is a long-time fangirl and writes slash fanfiction for the Harry Potter and NBC Hannibal fandoms. She has a deep love for fandom culture, and can be frequently spotted on Twitter and Tumblr reblogging pretty fan art.