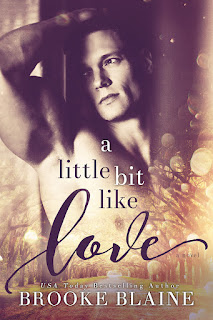 Just another minute, another touch, another kiss, building up to the inevitable—another heartbreak. Complete devastation I knew was coming and had resigned myself to because I couldn't stay away, and I couldn't let him go.


I know Brooke Blaine writes the kind of romantic comedy stories that can make me snort laugh (in the privacy of my home, of course!). I also know that she's got one hell of a kickass writing partnership with Ella Frank. Out of all her previous work, there's only one that I have yet to read, but I'm guessing that once I do, it'll let me know what one of my friends who's read the book has told me before—that Blaine has romantic suspense chops to wield and she wields it well. So, when the author announced that she had an M/M contemporary romance series in the works, the M/M-loving fangirl in me and the Brooke Blaine hooker that I am came together like the Wonder Twins (Google it, people!) and activated in a flurry of excitement and barely contained anticipation for her first solo foray into the wonderfully addictive world of M/M romance. And A Little Bit Like Love? Well, it's a whole lot like perfect.

South Haven is Brooke Blaine's new series and it's a second chance romance that kicks things off by way of series starter A Little Bit Like Love. This book not only gives readers a wonderfully written love story between the main characters, Lucas Sullivan and Jackson Davenport, both twenty-six, but we're introduced to the idyllic backdrop of South Haven, Georgia and a few but highly memorable of its residents, namely Lucas's closest friends, Shaw (whose last name I can't recall being mentioned in the book) and Sebastian Vogel. It's this cast of characters and this place where they live that will make you wish you could stay, or at the very least, have you come back again and again and again. Lucas, Shaw, and Bash may have that Southern gentleman-like way about them at times, but trust me when I tell you that these three are one trio that isn't afraid of getting rowdy and raunchy when need be.

Lucas and Jackson met when they were both high school seniors at St. John's Academy, a private school located in South Haven. They become the best of friends, and before the school year ends, more than that. But Jackson is left with no other option but to leave the boy he loves behind, with nary an explanation, and it's this act that not only breaks Lucas's heart but hardens its shattered pieces in the process. Fast forward eight years later, and Jackson finds himself back in South Haven because of business. When he overhears Lucas's name mentioned, he can't help but wonder what the boy who changed his life is like now that he's a man. What he discovers is that Lucas has a reputation for being a playboy and it's a reputation he isn't looking to reform. Lucas doesn't seem to want to have anything to do with Jackson, but this could be his one shot to make amends to the one person who mattered most.

Ah, these two guys. They came along on a weekend that started off on a nightmare of a note, and their story not only brought a smile to my face but helped to end the same weekend on a far better note. I'm something of an angst whore, so I loved the angst between Lucas and Jackson, and believe me, it came in healthy doses. After all, there was no excusing Jackson's decision to up and leave without explaining why when they were eighteen, and then there was Lucas's refusal to open himself up to the possibility of both forgiving Jackson and entertaining the notion of even becoming friends again, not that I could blame him, but hey, I happen to be an expert when it comes to holding grudges. I saw quite a bit of myself in both Jackson and Lucas. Maybe that's why A Little Bit Like Love so registered with me...or maybe it was because this book had heart, and so it captured mine. Five-plus stars. ♥