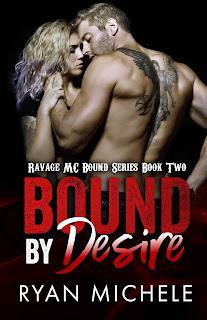 The next generation of the motorcycle club that is Ravage is back with Bound by Desire. Ryan Michele gives us the story that was teased at the end of Ravage MC Bound series starter Bound by Family and we find out what's happened to Deacon "Deke" Gavelson in the four years he's been away from his family and the club after leaving at eighteen. Deke has a great deal of anger thrumming through his veins, and it's underground fighting that gives him an outlet. When his cousin shows up battered and bruised, Deke decides to escort her back to Sumner. He has no intention of staying longer than necessary, but when he's informed of potentially devastating news, Deke knows he'll have to stay on even though he and his father still get on each other's nerves. He finds a new distraction in the form of a Rylie Hollister, the new head of security at X. There's no denying they're drawn to one another but they share more in common than attraction. Everything during Deke's stay is supposed to be temporary, but being with family and Rylie makes him want more...until someone from his past threatens all those who mean most to Deke.

Well now. This spin-off started off strong, and it's maintained that level of excitement with this second book, which isn't always easy to do, but Ryan Michele keeps the pace going with an intriguing story about family and brotherhood and how one young man puts a crushing amount of guilt and responsibility on his shoulders for them. It was clear in the first book that Deke had his issues, and wanting to see how much he had changed here was such a huge draw for me. He did a lot of growing up but he also held on to a lot of anger, and I was glad that he had more than outlet for it all but then he also had to confront elements of his past in order for him to truly move forward. I loved Rylie because she more than held her own and was resilient and independent. She and Deke together made sense and thank goodness there wasn't much drama between the two of them because there was already enough elsewhere. I'm looking forward to Austyn Cruz's story in September. Five stars for Bound by Desire. ♥

Bound by Family (book one) - five stars - My Review