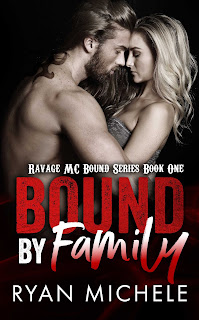 Bound by Family is the first in Ryan Michele's Ravage MC spin-off series, Ravage MC Bound, which features the next generation of brothers and the women they fall in love with. First up is Cooper Cruz, who was already part of the original series from the very beginning, what with his parents, Cruz and Harlow, starting things off back then. Cooper is now twenty-two and has patched in as part of the MC, just like his father before him. He's focused on helping his club out in finding a legitimate source of business to help them funnel in more money. What he isn't focused on is finding an ol' lady, but when he meets the gorgeous girl who manages the laundromat he and his brothers are at during a rally in Florida, the way Bristyl Daniels affects him is something he's never experienced in his entire life, but he's seen it with his parents and some of the older brothers in his club. But in all those shared conversations they've had, Bristyl hasn't told Cooper exactly who she is--the daughter and the sister of Sinister Sons MC members. All she's wanted is to feel like she belongs, but will losing one family mean she gets a new one?

Okay, this was so much more than what I was expecting! I re-read Ravage Me, which was the Ravage MC series starter, and while it was good, Bound by Family was better! You can tell just how far Ryan Michele has come in her writing. Her story development her was highly commendable, with her keeping things at a good, solid pace, but not making it feel rushed or forgetting anything vital in the process. While Cruz and Harlow's coming together felt like it was on fast-forward, Cooper and Bristyl were a bit of a slow burn. Yes, they were attracted to each other, but I liked how they went about getting to know one another before they finally decided to do something about what they were feeling. And just like the good series starter that it's supposed to be, Bound by Family introduces readers to the younger set of Ravage brothers as well as the offspring of couple who were part of the original series. The same couples are also featured here in more of a supporting position, but they're nonetheless memorable. That bonus POV at the end from Deke Gavelson, Cooper's cousin, has me excited for book two. Five stars for book one. ♥