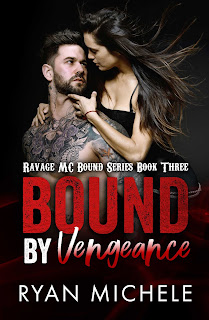 Austyn Cruz was only nine when nineteen-year-old Matthew James--the man who would be bestowed with the road name Ryker--joined the Ravage motorcycle club. For years, Ryker only saw Austyn as Cruz and Princess's daughter, the adorable girl who was an MC princess. But then she grew up and there was no possible way Ryker could deny just how physically attracted he was to her. Their ten-year age difference and the fact that she was the prez's daughter had him hesitating to pursue anything, but when the club finds out that she's been kidnapped and harmed, everyone is protective and Ryker decides it's time to show Austyn just how much she means to him. But she's wary. No one knows all her dark secrets--secrets that have her believing she's dirty and that no one could possibly ever want her. So even though the one man she's always had feelings for is finally looking at her like she's a woman he wants, she fears that when Ryker learns the truth, he'll want nothing more to do with her. Everyone in the club is seeking revenge for what was done to Austyn, but vengeance is hers even as Ryker lays his claim on her.

It seems that author Ryan Michele is making sure that the Ravage MC Bound becomes my favorite MC romance series for 2017 because three books in, and I'm still as hooked as I was when I read the original series, Ravage MC. Heck, there's a strong possibility I'm even more hooked with this new generation. Michele knows what she's doing when she gives her fans and readers teeny, tiny doses of the next couple to come in the series, and in terms of Austyn and Ryker's story, I've been antsy for it since I finished Bound by Desire a few months ago. While Austyn may have had a family she knew would have her back no matter what, she felt sullied and the stain of what was done to her over a period of time was one that she couldn't easily rid herself of. On the other hand, Ryker's family history is a complex one, having been kicked out by his polygamous biological father and now worried about his siblings, especially his younger sisters who will be forced to be married of to whomever their cult leader sees fit. There are things from their past that have hurt them, but both Austyn and Ryker are strong--and more so together.

The book's main focus is the love story between Austyn and Ryker, one that has been over a decade in the making, though it's clear that the romantic feelings didn't really develop until she had done a bit of growing up--at least, physically--and he had realized there was no point denying how he truly felt about her. Her quest for revenge and his need to protect his siblings are secondary stories but they're nonetheless vital to moving the actual love story forward because they allow the main characters to discover essential parts of what makes the other person the way that they are, whether in a good or bad way. As their romance progresses, it may seem as if their individual focuses experience a lull, but actually, when they do pop up, we realize that things aren't as quiet as they may seem. Can I just say that I love how both events were resolved because I think that any other way would have been disappointing? Plus, we get an idea of who could be up next for the fourth book, though I'm wondering who it is that'll be paired together...or hey, it's possible it won't just be a pair. Hmmm... Five stars for Bound by Vengeance! ♥

Bound by Family (book one) - five stars - My Review