Review: A Change of View by Freya Barker (Northern Lights #2) 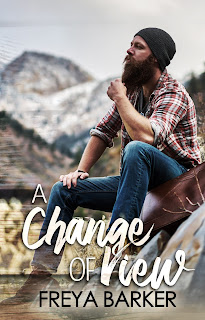 "I love you," she offers, looking me in the eye.

"I know," I respond, taking me time to watch her happy flushed face on my pillow.

Finally, I lean closer and add, "Because I love you, too."


At forty-five, Lilith Talbot is about to make a major change in her life. moves to Wawa, Ontario to take over the Whitefish Motel, left to her by her late uncle. She knows this is a huge risk, especially given the fact that she knows nothing about running a motel. Not everyone in the quaint township is all that welcoming, but there are those who are hospitable, while others are a tad too welcoming. Then there's Riordan Doyle, Leelo's closest neighbor and owner of a fishing lodge called Jackson's Point. Leelo isn't too sure what to make of the burly, bearded guy who begrudgingly helps her with repairs around the motel, but they form an unexpected kinship, one that surprises both of them. Leelo and Roar grow closer, but she's finally earned her independence and as much as she wants him to be a part of her life, will she have to give up what she now has in order to keep him with her always?

Gah! This! This novel is my favorite Freya Barker read. Well, my favorite so far since you never know when an author is going to surpass the bar they've set for themselves with their most recent release. But seriously, A Change of View, which is the second in her Northern Lights collection of standalone stories, went above and beyond my expectations for Barker's follow-up to my previous favorite, A Change in Tide. This love story had main characters who were both forty-five years old (hooray for being in your forties!) and already had a host of experiences, and yet they were still filled with both excitement and trepidation for this new journey they had found themselves in once their paths had converged. Leelo was unlike any other woman in her mid-forties I had ever come across before; Roar was a surprise, as well, when it came to the jar that held the whispers of his heart.

To live your life over when you're in the middle of your life (aka midlife) isn't easy. I may not be able to relate to Leelo in terms of her blue-hued hair and her myriad of tattoos, but I more than empathize with that desire she had to find her place in the world. Other chapters of her life had already closed and she made the brave and brazen choice to open a new, come hell or high water (or everything else that befell her when she moved to Wawa). She's become one of my all-time favorite heroines. She was spunky and spirited, but she also had her fears and failings and wasn't the type to deny just how imperfect she was. Whether it be her relationship with her daughter and son, or forging a new relationship with dear Roar, I loved how Leelo took ownership of her life and embraced the good and learned from the bad. I'm highly recommend A Change of View and give this very inspiring read five-plus stars. ♥

Read my reviews for the Northern Lights series:

A Change in Tide (book one) - five stars - My Review

Purchase A Change of View on Amazon.