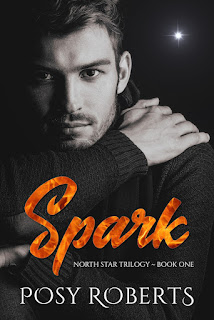 Spark is the first book in Posy Roberts's North Star trilogy, with each book being re-released after having been originally released by Dreamspinner Press a few years back. Funnily, I didn't realize that I had already read the books a couple of years ago until after I started reading an advanced reader copy (ARC) of book one. That being said, I continued reading, and I'm glad that I did because it was great being able to re-experience the first part of Hugo Thorson and Kevin Magnus's love story. Because it has been about two years since I read the trilogy, I can't be a hundred percent positive what, if any, changes may have been made. What matters is that it's the same story.

When he was only sixteen, Hugo Thorson had fallen totally and absolutely in love with Kevin Magnus and Kevin loved him just as much. But life and circumstances beyond their control led them down different and separate paths. For seventeen years, they lived their own lives--Hugo as an out and proud gay man whose world was the stage and Kevin as a married man with children. Once again, however, fate intervenes. Kevin is on his way to getting a divorce when he and Hugo meet again. The connection between them is as palpable as ever, but as much as a future with Hugo seems enticing, Kevin fears his hidden bisexuality could cost him custody of his two children.

This was a good read, albeit a REALLY long one. There's something about second chance romances that appeals to me because it's difficult enough trying to establish a relationship, but when there's history involved, whether it be good or bad, things become waaay more interesting. Hugo and Kevin were engaging main characters for the most part, and their respective lives were already established even before they saw each other again. Things become far more complex during their reunion, thanks to having a soon-to-be ex-wife AND two children who had no idea about Kevin's bisexuality. Spark was a four-star start to the series, and sets things up nicely for the next two books. ♥