Review: More Than Crave You by Shayla Black (More Than Words #4) 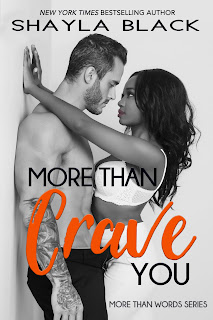 Evan Cook is the sort of man others would envy. He's a billionaire and a genius and he seems to want for nothing. But he's also a man who endured the loss of his wife, and six months later, he's decided that he's done with the whole falling in love thing and would rather procure a wife the same way he would any of his other dealings--he takes emotion out of the whole affair. He isn't looking for Mrs. Perfect; he simply wants someone to share his home and life with while also being mutually satisfied in the bedroom. He doesn't need the romance. He surprises himself when he realizes that the ideal candidate has been right before him all along--his assistant, Nia Wright. One night together definitely highlights just how scorching they are sexually, and he's pretty sure there's no way either of them would make the mistake of falling for each other. So why does it feel as if that's exactly what's happening, at least on Evan's end? Would Nia even want to be with someone like him if feelings are involved, and could the revelation of Nia's deepest and darkest secret require Evan to give up the woman he more than craves?

Evan isn't what you'd call a peripheral character in any of the previous novels in Shayla Black's More Than Words series, so his story can definitely be read as a standalone. More Than Crave You was a good read, one that wasn't what I'd necessarily call angsty or heavy, but it wasn't light fare either, at least as far as I was concerned. Evan was a curious main character. He isn't your typical alpha billionaire intent on taking over the universe and showcasing his prowess in every arena. He's different, and I'm always in the market for "different', especially if it means having a character stand apart from the previous other heroes in the series as well as those who can be found among the plethora of billionaire romances out there. I appreciated the author coming up with a story that isn't all fluff and how she didn't go with an overly formulaic approach to both the development of the story and to her writing of it. I liked Nia as much as I did Evan, thanks to her not being needy or act like some damsel waiting for Evan to come save the day. While not my favorite in the series, More Than Crave You still proved to be a satisfying four-star read. ♥

More Than Love You (book three) - five stars - My Review

Purchase More Than Crave You on Amazon | B&N | iBooks | Kobo.