Review: Hidden Hearts by Lindsey Detwiler (Lines in the Sand #0.5) 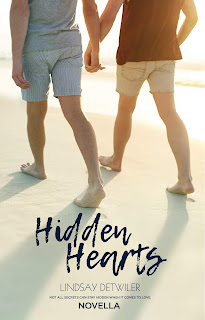 Anyone who knows me or, at the very least, is familiar with my book blog knows how much of an M/M romance fangirl I am. Now, I've read three of Lindsay Detwiler's books in the past, one of which was the first full-length novel in her Lines in the Sand series, and while those didn't resonate with me as much as I hoped they would, I did want to check out her dip into M/M when I saw that she had a novella that fell into the genre and that it was a prequel for the series I mentioned. So, with a heck of a lot of hope and fingers crossed, I dove into Hidden Hearts.

And well, Hidden Hearts was...okay. This was the story of Lysander Wyatt and Reed Wilder, the former being the owner of Midsummer Nights, a popular bar in his hometown of Ocean City, Maryland, and the latter being a new transplant to the area with hopes of opening a souvenir shop called the Sand Dollar. Lysander is done with flings and hook-ups and hopes to find what his parents had--a forever kind of love and commitment; on the other hand, past experience has taught Reed to be less forthcoming with his sexuality and to not hold faith in things like love.

Sigh. I really wanted to like this book. Unfortunately, the story fell flat, with Lysander and Reed not really giving me that connection and chemistry I wanted to Lysander friend and employee Jodie being too much of a presence in their story. And sorry, but there was a point where the girl's advice smacked of basically saying that Lysander should stick out with Reed and be accepting and understanding of the guy's choice to keep his relationship with Lysander a secret. Really? And why is Lysander listening to someone whose own track record in romance is a dud?

The romance wasn't inspiring and the sex was hinted at, and well, there wasn't all that much going on, and for a novella to not give me much of anything is difficult to do. Basically, I was very much underwhelmed. Hey, I don't need sex in a book for me to like it, but it was already in ho-hum territory and maybe some sex could have livened things up. And again, there was the whole weird name thing... Georgette, Jodie, Joseph, and Juliet as Lysander's employees? All with the same beginning sound to their names? Really? Sorry, but this was just a two-starred read. ♥