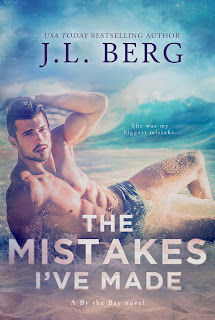 J.L. Berg's By the Bay series has been a case of hit or miss with me. It didn't get off to the most auspicious of starts but it more than bounced back with the next two offings. Unfortunately, the fourth--and latest--release was a bit of a letdown. The Mistakes I've Made is the story of twenty-eight-year-olds Taylor Sutherland, younger brother to Dean, whose own story was told in The Scars I Bare, and Leilani Hart, hotel heiress to Hart International. Just when he thought he had freedom in his grasp after graduating from high school, Taylor and his older brother put their mother and family-owned business first. When Dean was badly injured after the ferryboat accident, Taylor stepped up and not only kept the business afloat but spearheaded making it into a success. When Hart International buys the rundown Cozy Hotel, the community of Ocracoke worries about what it would mean for their island town. Taylor refuses to allow this conglomerate to take away from the beauty of and business on the island. But when he meets Leilani, he isn't too sure what's worse: his dislike for what she represents or his undeniable attraction to her.

First things first: I liked the idea behind the book. This had enemies-to-lovers all over it, and that being one of my favorite tropes, I was excited to see where the author would take the story. In terms of Taylor and Lani being on opposite sides of the battle for the future of The Cozy Hotel, I give the book a thumbs-up. Lani refused to back down and aptly put Taylor in his place several times, and Taylor took up the challenge of putting his hometown first. Where the book falters is with the chemistry between the two main characters. I desperately wanted and needed more. Sure, these two were supposed to be insanely drawn to one another, but I just didn't see nor feel it. There was an insta-something going on, and I'm not one who's anti-insta-anything, but I want to be convinced that there's SOMETHING there, whether it be lust or love. I liked Taylor; I liked Lani. Together? Well...not so much, and not because I didn't think they belonged together. They just didn't click for me, and for that I'm really sorry because that's such a must. Taking all things in consideration, I'm going to give The Mistakes I've Made three stars. ♥

Read my reviews for the By the Bay series:

The Choices I've Made (book one) - three stars - My Review

Purchase The Mistakes I've Made on Amazon.