Review: Once Upon a Sure Thing by Lauren Blakely (Heartbreakers #2) 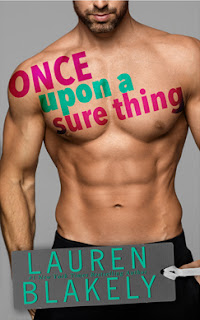 And now I’m here, and this touching has unlocked all these feelings.

Feelings I don’t know what to do with.

So I do as asked.

I want to take her and keep her, and I know that as I fuck her, I’m making love to her.

It can never be anything else with my Ally, my Honey, my woman.


Ah, these Evans boys! Oldest brother Campbell was going to be a difficult act to follow, but oh my, middle brother Miller more than stepped up to the plate. Lauren Blakely serves up a best-friends-to-lovers romance with her second outing in her Heartbreakers series. Entitled Once Upon a Sure Thing, we’re re-introduced to thirty-four-year-old Miller Evans, better known by his stage name of Miller Hart, one-third of the uber popular pop-rock band the Heartbreakers from quite a few years ago. Miller’s best friend is thirty-one-year-old Ally Zimmerman, known on YouTube for her videos singing with her brother Kirby and for her audiobook narration skills on young adult bestsellers. There’s no denying that Miller and Ally share a gift for singing, but singing together is a whole different matter—which is why Miller never even considered Ally when he finally embarks on his quest to find the potential half of a new singing duo…and then he meets Honey Lavender.

Miller and Ally share a really strong friendship, one that may have an inkling of something other than platonic, but it isn’t something that’s overly emphasized in the first few chapters of the book. Becoming involved in a manner that’s anything but platonic already has its usual set of complications, but add to that Miller’s less than stellar record when it comes to mixing business with friendship plus Ally’s own complex relationship with her eleven-year-old niece Chloe who she’s legal guardian to and these two look like they’ve got the odds stacked against them. One of my favorite things with this particular couple has to do with the fact that their story wasn’t based on unrequited feelings or one or both of them pining for the other in the six years that they’ve been friends. These two truly do have a close friendship that was simply destined for far more, if only they’d figure out that it was perfectly okay for them to become more than the best of friends.

I adored Miller and Ally, as a couple and as individuals. They shared close-knit relationships with their respective siblings and nieces and nephews, with Ally taking things a step further since she was now more of a parent than an aunt to Chloe. I also loved where Lauren Blakely took their story. Seriously, she could have taken the easy route, and it would have probably turned out well and quite enjoyable, but the fact that Blakely decided to really make this stand out with her creativity and originality made for a far better and more memorable read overall. We also see where Campbell and Mackenzie are in their relationship while glimpsing bits of where youngest brother Miles may be headed with Roxy Sterling (totally not a spoiler since their blurb is available for perusing online!). Once Upon a Sure Thing is, corny as it may sound, a sure thing, and while it can be read as a standalone, I highly encourage you to read this series in order. Five-plus stars! ♥

Read my reviews for the Heartbreakers series:

Purchase Once Upon a Sure Thing on Amazon | B&N | iBooks | Kobo.