Review: A Ferry of Bones & Gold by Hailey Turner (Soulbound #1) 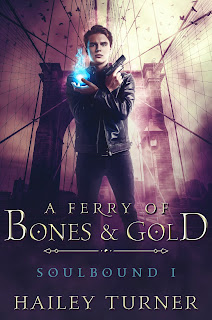 “I bound your soul to mine,” Patrick said, his voice tight, panic making him bite out the words at a quick pace. “I bound you, Jono, and that's a death sentence in this country. In any country.”

“Can you undo it?” Jono asked.

“No," Patrick answered truthfully. “It wasn't my magic that bound our souls together.”

Patrick stared at him in disbelief, digging his fingers into the back of Jono's hand. “How is this okay?”

“Because the Fates gave me to you.”

Color me gobsmacked and very much impressed! My introduction to Hailey Turner’s writing couldn’t have gone any better, and that’s saying something considering it takes a heck of a lot to leave me speechless (in a good way!) when it comes to urban fantasy reads. I need to be able to not just picture the world that the author has created and built in my head, but to also believe in its existence, and same goes for the cast of characters that they throw into the mix. With A Ferry of Bones & Gold, not only did Turner give me what I hoped for—a good read—but she sure as hell surpassed any and all expectations I had for this series starter, and she’s left me wanting to find out what more she has in store for her Soulbound series moving forward in all the months to come.

Special Agent Patrick Collins always knew the time was going to come for him to pay his debt, and when the gods come to collect, there’s no reneging or asking for extra time. A soul debt is a soul debt, and even a mage like Patrick can’t conjure any sort of escape route for himself. When an immortal goes missing and a crime wave involving killings that have a ritualistic element to it, the all too familiar feel of it is straight out of his nightmares and they look to have unfortunately come true. He’s got a lot of challenges ahead of him, not least of which are the other supernatural forces and preternatural occurrences. The last thing he expects is to find an ally in werewolf shifter Jonothon de Vere, but could Jono prove to be the greatest challenge to Pat’s sanity and survival?

I don’t want to give anything away so I’m going to try my best to keep this part of my review as spoiler-free as possible. This first in a series is the sort of book that’s meant to be experienced by the reader so that you’re able to get a better feel for this world that Hailey Turner has created, not just for her cast of characters but for the reader as well. Pat (who hates being called Pat) and Jono were the sort of pair that you wanted butting heads as much as you wanted them burning the sheets. There’s a lot that goes on in the story, but not too much that you’re either distracted or confused by what’s happening. This is the first in a series, and it does a splendid job enticing the reader into needing more from the Soulbound world. Five-plus stars for A Ferry of Bones & Gold. ♥

Purchase A Ferry of Bones & Gold on Amazon.