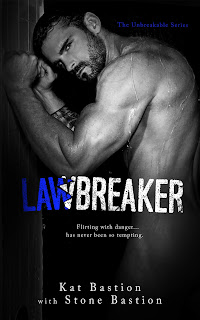 When I heard that Kat and Stone Bastion had the third book in their Unbreakable series slated for release, I was all excited to get my hands on it. I loved the first two novels—Heartbreaker and Rule Breaker, both of which were released in 2016—and my expectations for book number three were, admittedly, quite high. While I confess that Lawbreaker isn’t my favorite in the series—that title still belongs to the second release—I did get a kick over reading the story of the barely legal female Robin Hood and the twenty-something bar owner seeking redemption but finds far more.

Twenty-five-year-old Benjamin Bishop suspects his newest employee isn’t old enough to be working in his establishment and when refuses to tell him how old she is, Ben promptly fires her…and then goes looking for Shay Morgan. She may only be eighteen but Shay’s learned a thing or two, thanks to a life filled with strife and struggle. These two share a unique connection, but they also push one to have a better understanding of the other’s perspective, and vice-versa. When a crime involving Ben’s family comes to light, could seeking justice shatter Ben and Shay apart?

Like I mentioned earlier, this third Unbreakable wasn’t my favorite, but that doesn’t necessarily mean that I didn’t like it. As a matter of fact, I did, but I did have rather lofty expectations for it given how much I fell for the stories and characters in books one and two. It took a bit longer for me to see the chemistry that Ben and Shay were supposed to have, and with chemistry being an absolute must between the main characters in any romance novel—heck, in any fictional story with two lead characters—I read, this could have made or broken my final opinion on this book.

Thankfully, I did begin to get a feel for this particular couple, and I appreciated just how interesting they were as individuals and how they were able to come together as a pair later on in the book. Shay’s independence and stand by her convictions made her an appealing heroine, and I appreciated how Ben wasn’t your typical guy born with a silver spoon in his mouth. The back and forth helped give me a better idea of who Ben and Shay really were, and that, in spite of their differences, they did belong together. Overall, Lawbreaker turned out to be a 4.5-starred read. ♥

Read my reviews for the Unbreakable series: