Review: More of You by A.L. Jackson (Confessions of the Heart #1) 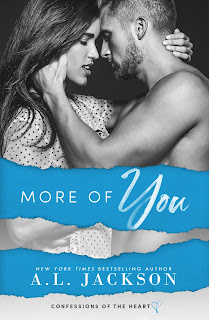 “You took my heart when you left,” I whispered.

He took a slow step forward, his confession cracking in the air. “And I left mine with you.”

You'd think that after all these years of reading A.L. Jackson's books, I'd know to be prepared with at least a small pack of tissues each time I pick up one of her novels. Her latest release, a second-chance romance and Confessions of the Heart series starter, pulled at my heartstrings which, in turn, had me pulling one tissue at a time, each time. The angst that A.L. Jackson has always been known for is ever-present, but this isn't merely an angsty novel about first loves finding their way back to where it all began in hopes of maybe getting another shot at what they once lost. There's a fair bit of suspense thrown into the mix, and well, I just happen to love that nearly as much as I do angst, so that was a double win. Add in Jackson's beautiful writing and fab cast of characters and this a real winner.

Dealing with the murder of her husband Joseph was difficult enough, but when Faith Linbrock Avery begins to receive ominous notes, she's worried not just for her safety but for that of her three-year-old daughter Bailey. Help comes in the form of Jace Jacobs, and while Avery knows she needs protection, the last thing she wants is to have the boy who broke her heart ten years ago to work his way into her life once again. She had been warned time and again to keep her distance from the boy from the wrong side of the tracks, that the bad boy would corrupt the good girl. Experience has taught her better, but that pull to Jace is ever-present, and it's a pull that they both feel. Jace could be the one person who can save her from harm, but he could be the same one to devastate Avery again.

Tissues, people. You're going to need tissues. There, I said it. This book was just...le sigh. My heart broke time and again for Faith, but goodness how this girl had a courage within her that kept her going. Her life hasn't been an easy one in the decade since Jace walked away from her, but she was still standing. And Jace? If you base it solely on the prologue, it would be easy to dislike him for leaving Faith, but once you learn his story and why he felt he had to make the choices that he did, trust me, you'll get why so many others have fallen for him just like I have. This book also happens to have supporting characters that I'm excited to get to know even better as it all moves forward, which is why More of You was a stellar five-starred start to A.L. Jackson's Confessions of the Heart series. ♥

Purchase More of You on Amazon.