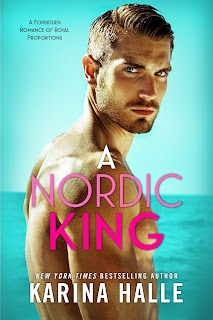 I adored Prince Viktor of Sweden and I loved Prince Magnus of Norway, but it’s the widower monarch from Denmark who’s managed to claim my cynical but royal romance-loving heart. A Nordic King is the third novel in an untitled collection of royal romance stories from bestselling author Karina Halle, and I must confess that this one is my favorite of the bunch, and that’s saying something considering the first two—A Swedish Prince and The Wild Heir, respectively—are among my favorite reads so far this year. Each book can be read as an absolute standalone, although all three male main characters were introduced in the series starter, A Swedish Prince.

King Aksel of House Eriksen is a young king at forty, but his life has been overcome by tragedy over the past few years, what with having lost his father four years ago, thereby taking over the throne upon his passing and witnessing his mother lose her way, and then his wife, the much beloved Princess Helena, having been killed in a car accident two years later. With a country to rule, King Aksel recognizes the need for his young daughters, Princesses Clara and Freja, to have a nanny. When she comes in the form of twenty-six-year-old Australian Aurora James, he quickly realizes she’s no pushover. Aurora pushes the man’s buttons like no other, but something else she needs to push aside are how own growing feelings for a man born to be king and ruler of her heart.

There’s a heck of a lot more that goes on in Aksel and Aurora’s story than the book’s blurb lets on. Both Aksel and Aurora have certain dark secrets that they’re keeping, not just from each other, but from the public in general, and those secrets have the power to destroy them as individuals, as a couple, and Aksel’s reign. You’re going to have to read the book to find out what those secrets are, but suffice it to say that the secrets plus the back and forth between the main characters and the romance and sex were top-notch, making for a remarkable read that I didn’t know I needed until I had it in my hands. A Nordic King is now one of my favorite Halle reads. Five-plus stars. ♥

Purchase A Nordic King on Amazon.