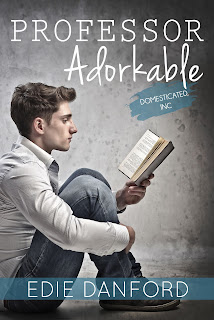 Glag! It’s been awhile since I’ve read something of Edie Danford’s and her latest release is a sure reminder that I need to catch up on everything I’ve missed on while also spotlighting a newly discovered fact: this author can write lighthearted fare as well as she does the heavier stuff. Professor Adorkable is the first in her new Chicago-set Domesticated, Inc. series, and we’re introduced to twenty-three-year-old Peter Schulz, the housekeeping professional from Domesticated Inc. assigned to Marek Janos, a twenty-six-year-old physics professor originally from the Czech Republic. Over the past few months that they’ve been living in the same space, the two have become friends, but there’s an underlying attraction there—one that Mar wants to explore further, but one that Pete is wary of engaging in. They’ve both got pasts they’re not proud of, but maybe if they give their feelings a chance, it could be the beginning of a future…together.

While this series starter did have a lighter feel compared to the other books of the author’s that I’ve read, there was still a measure of angst to it which my angst-addicted self very much appreciated. I liked that these main characters had more going for them than the fact that they were basically employer and employee. The complications to any sort of relationship between them go beyond the usual or expected, and there isn’t drama just for the sake of drama. There wasn’t any sort of immediate connection on my end to either Pete or Mar, but I did enjoy getting to know them, and by the midway point, I did feel emotionally invested in their story and where their relationship was headed. I liked that there weren’t any easy fixes for these two, but that they still had their respective support systems to lean on. I quite enjoyed Professor Adorkable and am avidly curious to see whose story could be up next in the Domesticated, Inc. series. Five stars! ♥