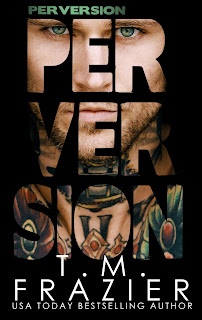 T.M. Frazier certainly knows how to kick off a new series! Perversion, the first in her new trilogy by the same name, introduces readers to the cast of characters, headlined by main characters Tristan Paine and Emma Jean Parish, while giving enough of the story to whet the reader's appetite and then throwing in that expected cliffhanger that makes you wish time moved faster. Two foster children who forge the oddest of connections, but it's one that proves to be life-altering for both. Tristan was sixteen and Emma Jean was twelve when their paths first crossed, and impressions were made all around, enough that neither one forgets the other even though it takes half a decade for them to even be with each other's vicinity. Those five years may have led them down different routes, but they seem to be destined for a collision course that neither of them could avoid even if they wanted to. Tristan now goes by the moniker of Grim, a name which he's earned. He is, after all, the executioner for the Bedlam Brotherhood. And Emma Jean? Well, she's still the con artist he glimpsed when they first met, only now she works for Los Muertos, a sworn enemy of the Brotherhood. Falling in love may feel like destiny...but death is inevitable.

Yes, this does end in a cliffhanger, and yes, I believe all cliffhangers are evil, but I cannot, in good conscience, dissuade anyone from reading this series starter! The bonus is that the wait isn't too long--think a few weeks--but I totally get that some readers will prefer waiting for all three books to be released before diving in, and hey, for someone like me who doesn't have that virtue known as patience, I feel you. So, I'm going to try my best to keep this review of mine as spoiler-free as possible. Tristan and Emma Jean have the sort of connection that make it seem as if they were always meant for something more--something that neither of them could really escape from because it would find them sooner or later. I wouldn't label their love story one that's kind of like Romeo and Juliet's, but they do belong to two rival factions that would not hesitate to take lives and drown the world around them in bloodshed if need be. Think of this as a rivalry that takes no prisoners, and well, weaknesses are taken note and advantage of. Tristan and Emma Jean can be each other's strengths and weaknesses. Aaaaand, I'll leave it there. Suffice it to say, I'm already counting the days to book two, Possession, and I'm giving Perversion five stars! ♥