Review: Back to You by Kim Breyon (Against All Odds #1) 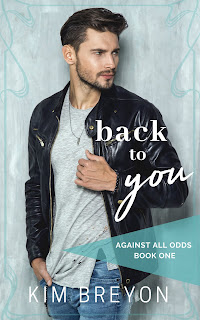 FYI: For the sake of transparency, I'd like to make it known that I served as an adviser of sorts prior to the publication of this book. I shared my thoughts and opinions at the author's request and without compensation.

If there’s one word that comes to mind when it comes to this book, it would have to be “promise”. A second word would definitely be “hope”. From the promises that Beck and Riley made to one another growing up to the hope that continued to spur Beck forward in his search for the boy that owned his heart, this love story had me becoming attached to these two guys and emotionally invested in where their tale of renewed chances would lead to. Admittedly, there's an awkwardness to them that lingers throughout the book. As if they're uncomfortable with themselves and with each other. Their transition from children to teens to adults wasn't fully felt because there were moments where how they were as kids were how they were as adults, as if neither one ever really grew up.

Was it a perfect read? No, it wasn’t. I needed more development, both story- and character-wise. I wished for a smoother read. But this is where those two words—“promise” and “hope”—come into play once again. Kim Breyon’s writing held promise, enough that I’m looking forward to witnessing what she has up next as she takes her series forward and hopeful that she’s barely scratched the surface of what she’s capable of as an author. There were bumps along the way, but fingers crossed that these were merely growing pains. Back to You gets three stars. ♥

Purchase Back to You on Amazon.