Review: The Evolution of Man by Skye Warren (Trust Fund #2) 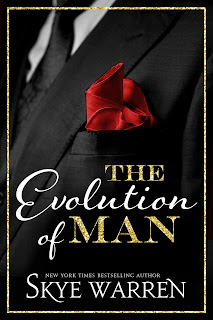 I was desperate for this sequel ever since the first book ended on that cliffhanger. I'll be honest, though... I'm on the fence. While I was very much taken with Survival of the Richest, there was something that I felt was missing--and that was due in large part to one particular bombshell that was put out there that was never fully resolved, or at the very least, left me with unanswered questions. That's not to say that The Evolution of Man is an awful read--not at all--but more of I had certain expectations and was left wanting.

The second Trust Fund book pretty much picks up where the first one left off. Hearts have been bruised and battered and the battle of wills between former step-siblings Christopher Bardot and Harper St. Claire does not appear like abating anytime soon. Throw in one major complication in the form of Sutton Mayfair, and everything is at an impasse with the only direction leading to nowhere good. In order for everyone to finally move forward, Harper is going to have to make particular choices--some more painful than others.

I'm not going to spoil the ending for anyone by saying who ends up with whom, only that this does end happily for one particular couple. Notice that I'm not mentioning names either. Whoever ends up being the odd person out, though, well, my heart broke for them, but while I can't say exactly why this was more heartbreaking than usual, what I  will say is that there's an inkling of hope for them AND there is a bonus short story involving them so...yay! So, while not my favorite, I did enjoy The Evolution of Man. Four stars! ♥

Read my reviews for the Trust Fund series:

Survival of the Richest (book one) - five stars - My Review

Purchase The Evolution of Man on Amazon | B&N | iBooks | Kobo.