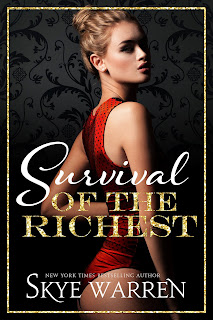 Note: An advanced reader copy (ARC) was provided by the author via Social Butterfly PR in exchange for an honest review.

Survival of the Richest is the first full-length novel in bestselling author Skye Warren's new series by the same name. There's a prequel novella entitled Trust Fund--which was a really great read!--that lays out the back story between two of three main characters, Harper St. Claire and Christopher Bardot. However, that prequel is also included in this novel, serving as the first twelve chapters of their tale. If you've already read the novella, which happens to be free on all e-retailers, you can go ahead and skip it and then jump right into the actual novel.

Harper St. Claire's and Christopher Bardot's lives became forever connected, not when they became step-siblings, but when Harper fell into the frigid waters and then rescued by Christopher. While the marriage of her father and his mother didn't last--which wasn't really that much of a surprise--Harper and Christopher maintained a close kinship, keeping in touch with letters over the years. Their relationship has nothing to do with the fact that they were once related by marriage and everything to do with a connection unlike any other.

Three years after that first meeting on her father's yacht, eighteen-year-old Harper's life changes once again however. She's just lost her father and he leaves almost everything he has to her. The one caveat? She doesn't have ownership over her trust until she turns twenty-five, and the boy she loves turns out to be the executor of her father's will. That love for Christopher switches to hate, and over the next few years, she sees him as an obstacle. Then she meets his business partner Sutton Mayfair. The games begin; only the ruthless will survive.

The adage about the line between love and hate being a thin one proves to be true when it comes to Harper and Christopher. Add Sutton into the mix and that line is multiplied by three and we've got one heck of a love triangle that turns out to be far more complicated than it already seems from the get-go. As has been my habit when it comes to Skye Warren's novels, I won't get into the nitty-gritty details of this book. I will, however, point out to two things: Survival of the Richest ends in an evil cliffhanger, AND it is one fabulously five-starred read. ♥

Purchase Survival of the Richest on Amazon | B&N | iBooks | Kobo.