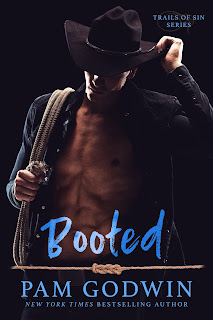 
“Your body is mine for the taking. Your heart, I have to work for.”

“Let me tell you something about me. If you were my girl, I’d make feel like my world. Only then would I deserve to make you feel like my slut.”

This! This was the series ender that the Holsten twins and Cassidy siblings AND fans and readers of their story in the Trails of Sin trilogy penned by my favorite dark romance author, Pam Godwin. Just a quick reminder: the books in the series need to be read in order—Knotted, Buckled, and Booted—because while each novel follows a different couple, there is a story arc that plays out throughout the series, and the trilogy’s two sets of siblings that make up the main characters—Jake and Jarret Holsten and Lorne and Conor Cassidy—are featured prominently at full length.

After serving eight of his ten-year sentence, Lorne Cassidy is a free man, but there doesn’t seem to be an inkling of the eighteen-year-old that went to prison after witnessing his sister being brutally raped by two men. There’s a wariness and distance to him that wasn’t there before, but twenty-four-year-old Raina Benally never knew the boy Lorne once was. All she sees is this current version of him, one that confuses her endlessly. Lorne, too, doesn’t know quite what to do with this enigmatic woman in the family homestead. She soon becomes part of his new normal, but how normal can it be to train someone to end the life of an enemy that every one of them share?

Lorne and Raina turned out to be biggest surprises of this entire series—though that doesn’t mean that Jake and Conor and Jarret and Maybe were predictable duds because they so weren’t—and a lot of that had to do with their individual stories and how they seem to be perfectly suited for one another. I don’t want to give too much away, especially when it comes to how they seem to have a common goal, so let me just say that in terms of the suspense part of the book, I give it A+. There were things I never saw coming, and I applaud the author staying true to the purpose her main characters held on to from the beginning until this impressive ending. As for the romance, it was quintessential Pam Godwin, and the epilogue was more than satisfying. Five-plus stars for Booted.

Read my reviews for the Trails of Sin series: