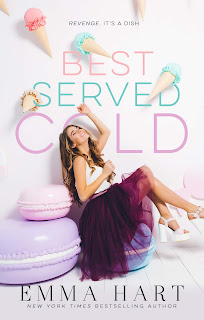 Best Served Cold is a second chance romantic comedy about two exes who become rivals when it comes to serving up the best ice cream in Key West, Florida. Chase Aaron and Raelynn Fortune were once happy and in love. A month ago, they broke up. Rae's consolation in life is that Best Served Cold, the ice cream shop her grandparents owned, is now hers, and she intends to make it THE place for people to come to if they're looking for most amazing ice cream around. But then The Frozen Spoon opens right next door, and it's owned by none other than her ex-boyfriend--the same guy who listened to her wax poetic about Best Served Cold and all her dreams for the place for the two years that they were together as a couple. From lovers to exes and now to rivals. So, what's a girl like Rae to do? Why give Chase exactly what she believes he deserves--serving up a cold dish known best as revenge.

Two things: I wasn't a fan of Rae's, and she isn't the first among Emma Hart's more recent heroines that I wasn't a fan of. Instead of being endearing, she came off more as whiny and petty, and at the end of the day, it's difficult to fully fall in love with a book I'm reading if my feelings towards one of the main characters aren't all that great. What did save this rom-com, though, was the story itself as well as Chase and the supporting cast of characters. There's more going on here than two exes who are battling it out for the title of "best ice cream shop in Key West". Was Chase the perfect guy? Nope, far from it, but he also wasn't a man-baby demanding that things go his way or else he'll throw a tantrum. So, while I didn't like the heroine all that much, I was won over by everyone else and the story that Best Served Cold told. My overall feelings towards this book were mostly positive so it gets four stars. ♥