Review: Of Sunlight and Stardust by Riley Hart & Christina Lee 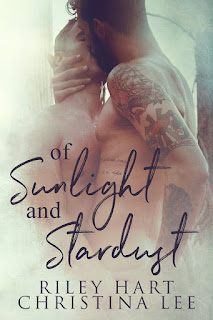 Note: An advanced reader copy (ARC) was provided by the authors via Vibrant Promotions.

“You know,” Tanner said with a thick throat, “someone once told me we’re all made of sunlight and stardust.”

“And maybe…” Cole said, echoing his own words from one of their first days together, “no matter what time of day from nightfall till morning, when you look up at the sky, you’re connecting with them in some small way.”


Oh, my heart… This book was just… It was everything I never realized I needed on the day I read it. I’ll be perfectly honest—when it was time for me to start reading Of Sunlight and Stardust, I wouldn’t have been able to recall what the blurb was even if you offered me a million dollars. But still I decided to dive in blind, bolstered only by the knowledge that this was penned by Riley Hart and Christina Lee, two of my favorite authors and a proven dynamo of a writing duo whether as Hart and Lee or with the former using her other pen name of Nyrae Dawn. And this book? Well, it had me leaning back on my pillows, curling up with my tablet on my lap and the covers wrapped around me just as this one-of-a-kind, extraordinary love story wrapped itself around my heart.

When Tanner Rowe and Cole Lachlan are introduced to readers, they’re at a point in their respective lives where the time has come for them to move on, regardless of whether they happen to be ready or not. Tanner has been a widower for a year, having lost his beloved wife Emma to a disease she fought valiantly, and Cole has just been released from prison, having served his full sentence. Tanner intends to keep the promise he made to Emma, and he unexpectedly finds a more than willing set of hands to help him out in Cole. As they bring the home that Emma wished for back to life, they discover a journal that chronicles the love of one young man for his best friend. As Tanner and Cole unravel the mystery of Tom Crawford and Charlie Myers, their own story evolves. They don’t know how either story will end or if there’s any hope of it continuing.

I love how we have two love stories that are playing out in this novel, but while one has an almost guaranteed happily-ever-after, the other one keeps you on the edge of your seat throughout. This was such a wonderfully written slow burn romance that had its own creative twist to it, and for someone who reads as much as I do, it’s those unique elements that I crave. Tanner and Cole’s story may share certain parallels to that of Tom and Charlie’s, but it needs to be noted that they do not play out the same way nor are they mere copies of each other set in different eras. I adored both for different reasons, and I appreciated how the authors managed to tie everything together so superbly, never pandering. I dare say that Of Sunlight and Stardust—which I hope has a spin-off because there are side characters I played matchmaker with—is Riley Hart and Christina Lee at their best; it’s one of my most loved and highly recommended reads of the year. Five-plus stars. ♥

Purchase Of Sunlight and Stardust on Amazon.