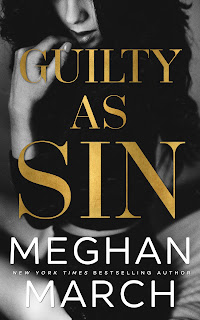 “We both know I don't deserve another chance to hurt you, just like you said. If you give me one more opportunity, I vow on my father's grave that I won't make the same mistakes I did before. I can be the man you need me to be.”

After that cliffhanger of an ending in Richer Than Sin, Whitney Gable and Lincoln Riscoff find themselves in a quandary of sorts in Guilty as Sin, the second novel in the Meghan March-penned Sin series. I also find myself in a quandary of my own writing this review because I have to be extra careful about what I mention because I don’t want to spoil either of the two books now available in the series. Gah! This is proving to be a really frustrating endeavor, but I shall try my best to get my feelings across, especially since this great series has gotten even more awesome!

Accusations abound in book two, and it all boils down to a matter of trust, something that’s in short supply when it comes to the folks of Gable. Sure, the town may be named after the Gables but there’s no question that the powers that be are very much the Riscoffs. The fact that Lincoln even has a shadow of doubt, however, when it comes to Whitney’s motives could well be the final straw for her. When forces seem intent on driving them further apart and try to take everything Lincoln’s worked hard for, these two will have to decide whether to fight together or each other.

And yes, I know that my reviews for both the Sin books give very little away, thereby making it somewhat difficult for a newbie to either the series or to Meghan March’s writing to have an idea about what they’re getting into. So, let me break it down into two important points: First, this series needs to be read in order because all three books tell the story of Whitney and Lincoln, the generations-long feud between their families, and the secrets that could destroy them, and second, March’s writing? Well, it hasn’t disappointed me (so far). Guilty as Sin receives five-plus stars. ♥