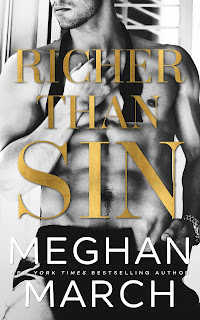 Bestselling author Meghan March kicks off her brand-new trilogy with a story of an unexpected love and a generations-long rivalry between two families that's already cost two people a decade of being together. Lincoln Riscoff and Whitney Gable were twenty-five and twenty-one, respectively, when they first met, and from the get-go, they shared a connection they'd never had with anyone else. They fell for each other, but in the midst of their warring families, choices had to be made, and when Whitney made the choice to walk down the aisle intent on exchanging vows, Lincoln did the only thing he could: stand up and object to the impending marriage. A decade later and after being on opposite sides of the country, Whitney's back and those marital promises she made? Well, they're no longer in play, but that doesn't mean nor does it guarantee a happily-ever-after for Lincoln and his Blue.

Richer Than Sin's blurb mentions a family feud, and what a feud it proves to be! Although, if you're thinking this story is something along the lines of the Shakespearean star-crossed lovers who belonged to the Montagues and the Capulets, Lincoln and Whitney's love story is very different, although the hatred could run run as deep as very real one between the Hatfields and the McCoys. Yes, the Riscoffs and Gables abhor each other, and when you learn the history behind it all, it's easy to understand why. But this being a Meghan March-penned read, expect a whole lot of heat, as well as a twist you won't see coming. I don't want to give too much away, other than mention that there's a whole lot more that goes on than what the book's blurb has put out there. Richer Than Sin also, unsurprisingly enough, ends in a cliffhanger, and I'm telling you, September cannot come soon enough. Five stars. ♥