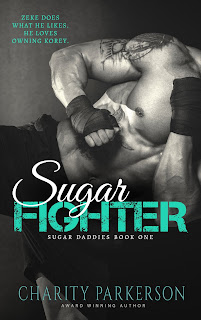 Confession time: Sugar Fighter is my first Charity Parkerson read. I know, I know! I should be ashamed of myself, especially since I consider myself a rather voracious reader in general and romance reader in particular. Sigh. What can I say? Being the book hoarder that I am basically means that I've already got a few of of Parkerson's titles in my tablet but I have yet to read them. So, why not start off with the author's most recent series starter, right? Well, I certainly wasn't disappointed reading the first in the Sugar Daddies series, and it's left me wanting even more of it.

When Korey's older brother Charlie is killed by a roadside bomb while deployed, it's Charlie's best friend Zeke that steps in to keep his promise to watch over Korey. Over the past few years, they've become more than housemates--they've become each other's closest friend and greatest source of support. Korey, however, has been harboring a crush on Zeke for years, a crush that he believes is unrequited. Sure, Zeke is fourteen years his senior and is far wealthier and more experienced than him; what Korey doesn't know is that the MMA fighter wants him for keeps.

This was an easy and quick read, and while I admit that there were certain details I wish had been delved into more deeply, there was enough in this book to keep my interest. The dynamic between Zeke and Korey seemed to always have this underlying sort of tension, which I think highlighted everything they were trying to keep beneath the surface. There's also bits of Maverick that have me curious as to what kind of story he's got to tell going into book two. While a wee bit rushed at times, Sugar Fighter turned out to be a good four-starred novella to dive into. ♥