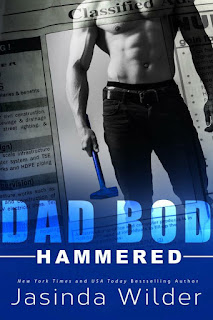 It's been awhile since I last read a Jasinda Wilder-penned novel, and if there was ever a reminder as to why I fell in love with her writing a few years ago, I'm glad it was this one. Hammered is Wilder's newest release and the first in her new Dad Bod series, which is about a group of men offering their services--handyman services, pervs!--and one of their customers just happens to be forty-year-old divorcée Imogen Irving. Not only did her husband cheat on her with more than one woman, he had no qualms whatsoever emptying their joint bank account--an account that was supposed to hold the money Imogen had been setting aside for the home makeover they'd been planning but was spent on her then-husband's gift shopping and none of those gifts were for her. She may not have enough money for a major renovation, but a broken AC and nailed down windows have her calling Dad Bod. The summer heat is getting to Imogen but there's a whole different kind of heat going on once Jesse O'Neill shows up. The man is, indeed, handy, but Imogen can't help but wonder what it would be like if forty-four-year-old Jesse got all handsy.

I adored this book! This was a romantic comedy that truly did bring a smile on my face because of the former and a elicited a laugh from my lips thanks to the latter. I loved that the main characters were in their forties and yet still had a playful and flirty quality to their romance. They weren't saddled by all the issues that are oft found in stories that have more mature main characters. I'm not saying neither Imogen nor Jesse were free of complications, but I was just glad that they weren't overly depressing to get to know and had to go through countless heartrending situations before finding their way to each other. I confess that I may have liked Jesse a smidgen more than I did Imogen, but these two were truly perfect as a couple. They had an energy to them that's become such a rarity nowadays. Jasinda Wilder has always managed to entice me with her writing, but this new novel of hers was a re-introduction of sorts. This had a far lighter feel to it compared to my previous reads from her, and I'm certainly looking forward to reading the rest of the series going forward. Hammered easily garners 4.5 stars out of five stars. ♥