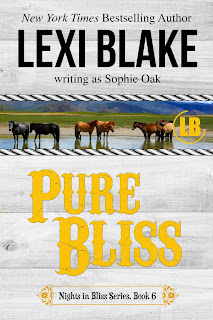 We're back in Bliss, Colorado, and Pure Bliss is the sixth novel in the Nights in Bliss series from Lexi Blake, a re-release and written under her Sophie Oak pen name. This is the story of twenty-seven-year-old Hope McLean, a woman on the run from her past who finds a place to finally call home and people she considers family in the quirky town of Bliss. She's had her eye on rancher James Glen ever since she first arrived in town, but the one time she asked him out and he turned her down was more than enough for her to believe he simply wasn't into her. The thing is, James is very much interested in her but he knows all too well what it's like to lose someone you love dearly, and Hope is a woman he believes he could end up loving too much, making the loss even more devastating. He's already lost his parents and his stepbrother abandoned him when James needed him most. Then five years after he turned his back on James and their hometown, Noah Bennett returns to take on the responsibility of being Bliss's veterinarian, but can he get back in James's good graces, especially if Noah decides he wants Hope, as well?

I wasn't a huge fan of Noah's for quite a few chapters of this book. The idea that he could simply turn his back on his stepbrother--someone he considered his best friend--and their ailing father AND Bliss as a whole who expected him to take over as the town vet simply to run off with some woman spoke of his selfishness. Yes, I get it: he reveled in the idea that this woman chose him over James, but ugh, talk about priorities, especially because of the events leading up to Noah's abandonment. He does redeem himself later on, but I had to get over the fact that he also decided to go after Hope, whom James's also wanted. These two spent a whole lot of time acting like little boys fighting over a new toy, but there was clearly a whole lot more to the sibling rivalry than meets the eye. As for Hope, there were times where she waffled quite a bit on what to do with herself, but while she could be seen as someone who would tear the stepbrothers even further apart, she ultimately became the one person who could bring them together...if only they could actually get their acts together! Men! Gah! I'm giving Pure Bliss four stars. ♥