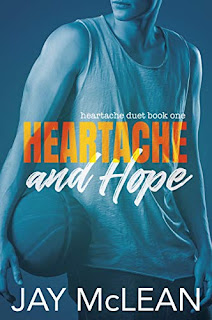 “Yes,” she whispers, her tears soaking through my shirt.

I blink back my own and try to stay strong, for her. “If you need proof that magic exists, I'm right here.”

I'm embarrassed to admit that my first read from Jay McLean was Where the Road Leads Me back in February 2015, and that it remained my only read from her for more than four years. I can't even come up with a reason for that lapse in judgment considering that book was one of my top reads for that year and had such a profound impact on me. And now here I am, having just finished reading Heartache and Hope, the first novel in the author's new Heartache duet, and I'm reminded of how much I've missed as far as McLean's past published work goes and how I've missed her writing in general. Once again, a Jay McLean novel has left its mark on me, and I can only imagine what she has waiting for readers when the conclusion to this duet is released in around two weeks' time.

Heartache and Hope is a young adult (YA) love story about two seventeen-year-olds who know all too well what it's like to be abandoned by those who were supposed to be by their side regardless of what life had in store for them. Ava Elizabeth Diana Diaz is the girl whose life changed three years ago, and Connor Jordan Ledger is the boy whose life shifted when he was three years old. She's the girl who used to have it all and he's the boy who could have it all. For years, Connor's endgame has been about making it to the NBA and he has the talent to back, but from the moment he sees Ava, his dedication to the game of basketball remains the same even as his devotion begins to be hers and hers alone. And while Ava knows all too well that she can't be the girl that Connor deserves, her heart wants what it wants. Ava may not have been looking for someone to save her, but Connor's prepared to rescue her.

Sigh. This book had all the feels and then some. Yes, there was a history of heartache for these two--and I'm not talking exclusively about the romantic kind--especially on Ava's end, but it's Connor's presence in her life that offers up a much needed spark of hope that, if not breathed new life into, could flicker and die. Now, I don't mean to sound overly morose or somber, but there's a reason this book is part of a duet, and that ending? Well, it broke my heart, and this was after I foolishly thought I wouldn't be needing tissues. Ava and Connor's tale is both hopeful and heartrending; THIS is why I read romance. Nicely done, Jay McLean. Five-plus stars go to Heartache and Hope. ♥

Purchase Heartache and Hope on Amazon.