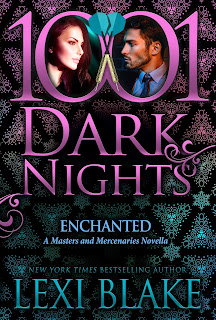 Enchanted is the newest novella in Lexi Blake's Masters and Mercenaries series, and while it may not have the same level of mystery and suspense that the previous books had, it still has every bit the romance and heat that I've come to expect from this series. This is the second chance romance between trauma nurse Sarah Stevens and Hollywood actor Jared Johns, who once had a strong connection but it was abruptly cut short by shocking events on Jared's end. He's done his best to reconnect with Sarah, but when she suddenly begins to ghost him, Jared finds himself at a loss. He wants to understand why Sarah has decided to cut ties with him, hopeful that once he knows what he did wrong, he'll be able to fix it. Sarah, however, remains mum, refusing to divulge what's caused her to keep her distance from the one man she believed could be more. Jared is desperate to show Sarah they deserve another chance and that they ultimately belong together, and help comes in the form of a three-day masquerade celebration of Charlotte Taggart's birthday in Sanctum. Will this be a fresh start or a bitter end for Jared and Sarah?

This was, hands down, my favorite novella in the series so far. Sarah and Jared had complications in their respective lives, but there was also no denying that they still had feelings for each other. While it was clear that Jared was making inroads to moving past his issues, i.e. finding out his best friend was a serial killer and was obsessed with Jared, Sarah kept hers under wraps for a good portion of the book, although what motivated both of them to stay away from each other had more to do with them not wanting to drag the other into a bigger mess. Now, for the record, I haven't read all of the books in the Masters and Mercenaries series, so I hadn't come across the one that dealt with Jared's best friend and how McKay-Taggart Security was involved in that whole thing. That lack of knowledge had me feeling a bit lost with regards to that particular story line, but I was still able to grasp enough of this new story to enjoy the novella. I'm definitely going to have make time to work my way through the series, especially since my curiosity has grown even more after having read Enchanted, which is receiving a 4.5-star rating. ♥