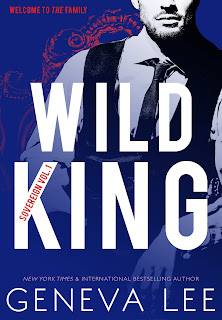 Oh... Hello there and welcome back into my orbit, Alexander and Clara! If you've read Geneva Lee's Royals Saga, then these two names should be more than familiar to you. After all, Alexander and Clara were the couple that launched Geneva Lee's career and made her the bestselling author that she is today and for good reason. But this review isn't about the story of how Alexander and Clara met and how they battled through the obstacles that were in their way as they struggled to make it to their happily-ever-after. No, this review is all about what happens to this royal twosome after that hard-fought HEA of theirs because Lee has just published Wild King, the first in her brand-new spin-off series, Sovereign. If you're like me and have been hoping for more from Alexander and Clara, then it's time to rejoice because we've got ourselves MORE and if this first book is a sign of things to come, things are about to get even more intriguing and far more enthralling as they deal with life within the British monarchy.

I'm going to highly recommend that you read the Royals Saga--or, at the very least, books one to three and seven (Command Me, Conquer Me, Crown Me, and Complete Me, respectively), all of which feature X and Clara's story-- before jumping into Wild King because I honestly think it'll give new readers to their love story a far better appreciation for what exactly these two had to endure just to be AND stay together. Can you read Wild King without having read the other books? Possibly, especially if you go into this new series starter just thinking of it as the love story of two married people who happen to be the reigning King and Queen of the United Kingdom. However, this is a continuing love story, so again, I'm sticking with my recommendation to read Royals Saga first.

Geneva Lee definitely doesn't disappoint. Expectations were high and boy, did she meet them. I've been so curious as to where X and Clara were at this point in their relationship, particularly being married AND being royal, and clearly, things are complicated. There's no denying that these two are still as madly in love with each other as they've always been. Heck, it feels that they're even more in love now, but with so much coming at them and so many more things demanding their time and attention, balancing it all isn't easy. Plus something goes awry, not that I'm going to divulge what that something is. Let's just say that keeping secrets is never a good thing, especially when the threat of it all coming out could do irreparable damage to a host of people, particularly the one you love most and swore to protect. You intrigued? Well, get reading already! You won't regret it. Five stars for Wild King. ♥