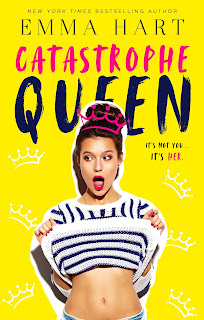 I discovered Emma Hart's writing in 2016 and promptly fell in love with her Burke Brothers series. My love affair with her books continued the following year, but somewhere in 2018, it was more miss than hit for me. I skipped on a couple of her more recent releases, and then I read the blurb for Catastrophe Queen, which is Hart's first release for the new year. There was something about a klutzy female main character and her hot boss that made me think this was going to hopefully be more than your typical office romance. So, I decided that this was as good a time as any for me to start reading an Emma Hart-penned novel, and I am glad I went with my gut because this romantic comedy was, hands down, one of the author's best releases--and now a favorite of mine--in a long while.

Twenty-five-year-old Mallory Harper is a walking disaster and she knows it. After a job interview, she's nearly run over by a car, spills her precious coffee, and has her flamingo undies landing on the ground and comes face-to-face with a dreamboat of a man. The last thing she expects is to cross paths with him again, only this time, she learns his name: twenty-eight-year-old Cameron Reid--as in the very same Cameron Reid who is now her new boss. Amidst even more spilled beverages, Mallory actually takes to her job quite well, and Cameron finds himself quite taken with his new assistant. Mal, however, has no clue that her boss is growing increasingly smitten with her. It wouldn't make sense. What would someone like Cam want with a girl he's already nicknamed Hurricane Mallory?

I was absolutely taken by both the characters and the story! This was an fabulously fun read, one that I read in a single go, shoving all distractions to the side for until I was done. There wasn't any drama and while I may be a self-confessed angst addict, there are quite a few that are angst-free yet I'm still all in. I love Mallory and Cameron but I also loved their respective families and Mallory's bestie, Jade. This would have been easy to give five-plus stars to, and the reasons I hesitated to do so were the use of the word "arse" since this is supposedly a story set in the US with American characters and Mal making comments early on about her lack of cooking skills and then later informs Cam it was the one thing she does disaster-free. Still, I adored Catastrophe Queen, which garners five stars. ♥