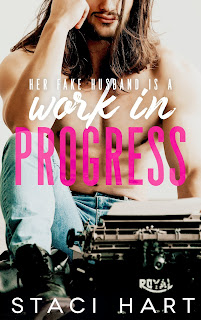 I had no idea going into Work in Progress that it was part of a series called Red Lipstick, but this new Staci Hart release works pretty well as a standalone, even if you may end up curious as to the stories the female main character's circle of friends have to tell, which is what happened to me. Yep, totally added the first two books to my to-be-read list. Anyway, Hart gives readers a love story about a shy blogger who happens to be a virgin and a bestselling author whose public persona is as fictional as the stories he writes that end up getting married for the sake of their respective careers. Thomas Bane may have readers who adore him, but his reputation has taken too many hits as of late. So, why not marry the one person who doesn't seem to be as blinded by devotion to his books as the rest of the crowd? Amelia Hall admires his writing, but isn't as taken by how his heroes treat his heroines. She already agreed to work with him on his new novel; maybe agreeing to a fake marriage won't be as hard as it may seem. One year is all he wants and she'll get the story she needs. His reputation will be repaired and his career saved and she'll get the internship that could land her a job with a publishing house. Win-win, right? What neither was prepared for was developing real feelings, but when challenges arise, will their love story get a happy ending?

Tommy and Amelia's story was a fun read, one that was sappy and sweet and all heart. This is the sort of romance novel that makes for the ideal weekend read, which is exactly what it ended up being for me on Saturday. There isn't a whole lot of angst, but what is there was enough to soothe the savage beast in me that feeds of angsty bits in romance novels. One of my favorite things about Staci Hart's new book was how Tommy and Amelia developed their relationship from two individuals who knew of the other and then got to know each other more and more as they spent time together. It's difficult to pinpoint anything I didn't like about these two. In short, they were both highly likable, and their respective "people", aka those they loved and trusted most--Tommy's twin brother, Theo, and their ailing mother, Sarah, Amelia's best friends, Val, Rin, and Katherine--and let's not forget their furry companions, Augustus the dog and Claudius the cat, aka Gus and Claude. With the three out of the four red lipstick friends finding love and happiness, there's only one left, and I will definitely be keeping an eye out for it. Till then, though, I shall be catching up with the first two novels, Piece of Work and Player. Work in Progress snags 4.5 stars. ♥

Purchase Work in Progress on Amazon.