Review: Living on the Inside by Londra Laine 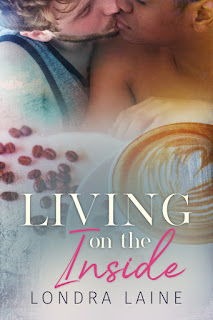 Living on the Inside is a new standalone read from Londra Laine, and it's the story of two men who are feeling a bit lost when they find each other but experience challenges once they enter into a relationship. Micah Grayson is a former convict who wants to make up for the time he's lost with his estranged son, which is why he's now living in the guest house that his son's mother owns. Starting over also means needing a job, but that's easier said than done since being an ex-con doesn't exactly endear him to possible employers. When he enters a coffee shop, the last thing he expects is to be offered a job, but then Adrien Darling is the sort of man who believes in giving people a fair chance. The two men form a friendship that becomes more, but in as much as Adrien feels for Micah, he can't tell the world about it, not when he has a family that looks down on him and makes him feel like a failure time and again. With so much baggage that they've got with them, will love be enough to lighten both their loads?

I love angsty books, and this one certainly had a lot of angst in it. Micah and Adrien were men who simply wanted to have a greater purpose in their lives and to actually feel like they were, like the title says, living on the inside instead of feeling dead. I absolutely disliked Adrien's family and I kept hoping he'd speak up or stand up for himself each time he was treated like crap by them sooner rather than later. In as much as Adrien helped Micah by giving him a job, Micah was what Adrien needed to feel loved and that he was worthy of it. The idea for the story was a good one but the pacing was a wee bit off in places. Living on the Inside has trigger warnings, so make sure to take note and proceed with caution should those triggers hit too close to home for you. I'm awarding this one 3.5 stars. ♥

Purchase Living on the Inside on Amazon.