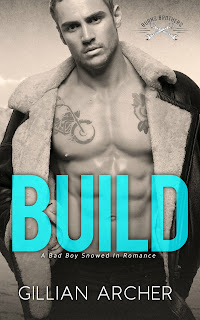 I've had Gillian Archer's True Brothers MC series sitting in my tablet for a while, and it wasn't until I read Build that I regretted not reading those four books sooner. They've been bumped up my to-be-read list, though, so fingers crossed that I'll be able to check them off before book two in Archer's Burns Brothers series is released. That being said, however, this new series starter can actually be read and enjoyed whether you've been a longtime fan or reader of the author's or she's new to you.

The series kicks off with the eldest of the brothers, twenty-eight-year-old Austin Burns, owner of Badass Builds in Sacramento, California. Things are busier at the shop where Austin and his brothers build custom bikes to a select clientele willing to shell out big bucks for quality rides. When he receives unfortunate news, he decides to head to his friend's cabin in Tahoe and proceeds to drown his misery with alcohol. It's there that he meets twenty-five-year-old single mother Rachel Tannenbaum, who happens to be the maid assigned to the cabin. They end up trapped together during a snow storm and get very up close and personal with each other. But can they make a go of a relationship when the snow clears and the realities of their respective lives cause more issues and stress for and between the two of them?

Austin wasn't the easiest guy to like in the beginning, but he definitely won me over as he revealed more of himself in the story. He's very protective of his brothers and the memory of their late mother and he clearly adores his dog Blue and his Aunt Wendy and cousin Sabrina. Rachel was much easier to like, but then there's a certain point in the story where I feel she over-reacted to something and then proceeded to act like a child with her refusal to listen to anyone or to see reason. Both Austin and Rachel acted immaturely at times, but they haven't exactly had stellar pasts, so I guess they get a pass of sorts. The romance is clearly there, as is the heat, and there's even some angst, so those were definite pluses. There was one particular issue that wasn't fully resolved regarding the the brothers' father--FYI, I wasn't a fan of Dylan's actions regarding that and I would have wanted that to be discussed and delved into further--but maybe we'll get that as the series moves forward. Overall, I enjoyed my very first Gillian Archer. I'm giving four stars to Build. ♥