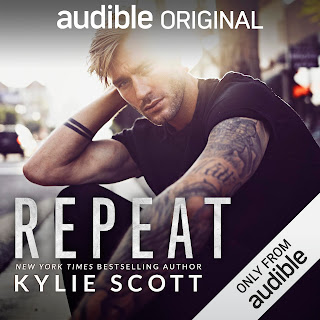 Note: The audiobook was provided by the publisher via InkSlinger PR.

I love when an established author manages to still surprise their readers by giving them something different and doing it successfully, and Kylie Scott did just that with her Audible Original release entitled Repeat. Narrated by Audible Hall of Fame inductee Andi Arndt, Scott's new romance is the first time she's releasing the book in audio format first, with the eBook and paperback editions slated for release some time in April. On its face, Repeat can easily be slapped with the label "second-chance romance" but there's so much more to the story than two main characters who were once a couple then go their separate ways only to find their way back to each other later on.

Twenty-five-year-old Clementine Johns shows up at the tattoo studio owned by thirty-two-year-old Ed Larsen and she doesn't get the warmest of welcomes. You see, Clem broke up with Ed a month ago, but a recent vicious attack has left her with traumatic retrograde amnesia. She's looking for answers and she wants to understand what would have caused her to leave Ed, the man she'd considered the love of her life. On the other hand, Ed isn't thrilled about having to relive why they were no longer together, but it's recalling the happier memories that may break him all over again. Some things are far better left alone, but could Clem and Ed have something worth repeating?

The combination of Kylie Scott's unexpected love story and Andi Arndt's spot-on narration was promising and this audiobook was a promise kept. Allow me to reiterate: there's more to this story than it being a second-chance romance. There's a mystery here courtesy of Clem's attack, but I won't get into it here because, hello, spoiler city. That part aside, I was fascinated about how there seemed to be two Clems: the one before the attack, and the one after. Like with everything else in life, you take the good with the bad, and neither version of Clem was perfect. She was very clearly different, and even Ed was, at times, taken aback at the change in this woman he loved and hated.

Speaking of Ed, I found it intriguing as well that in as much as he held a lot of anger towards Clem, he got to know this new version of her. I swear, the guy was refreshingly real but he was also clearly torn when it came to his feelings for his ex. He loved Clem from before, and obviously, he was falling for the new Clem. There were times that she almost seemed detached, but the more the story went on, it was as if parts of the old and new were merging together, and she was becoming more comfortable in her own skin. With writing as strong as Kylie Scott's and Andi Arndt's fab narration of all things Clem and Ed, Repeat was everything I didn't know I needed. Five stars. ♥