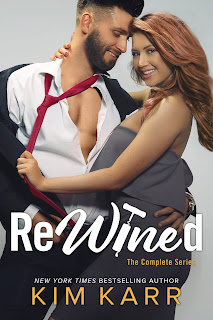 Originally in three volumes, Kim Karr has put them all together in one release, ReWined: The Complete Series. This was a fun read with a lot of lighthearted moments that belies the amount of angst that lies in wait when secrets are revealed. When he turns twenty-seven, Tyler Justin Ryan Holiday III knows what's waiting for him: taking the helm of the vineyard his grandfather started in Napa. What Tyler isn't expecting are the stipulations that are in place--stipulations that he'll have to agree to and fulfill if he wants that vineyard. First, he'll need to move back to his hometown. Then, he'll have to say goodbye to his days and nights of partying and carousing. Lastly? Well, he's going to have to get married. What's a guy to do? Why, get packing, start behaving, and find a woman who'll agree to be his bride. The first two are way easier to comply with, but his grandmother already has someone in mind for the third one, so it shouldn't be too bad...until he finds out that his bride-to-be is none other than Paris Elizabeth Hollis Fairchild. There's no love lost between them, but could that be due to their three-month affair a decade ago ending abruptly? This may be a mutually beneficial arrangement, that is if they don't end up killing each other first.

I really enjoyed Kim Karr's latest release! I made the conscious choice to read this as one complete collection rather than as each volume was being released separately last year, and I'm glad I did because I think I would have been frustrated with the whole waiting period in between. What can I say? I'm not exactly the world's most patient person. In all the Karr-penned books I've read, she has yet to disappoint me, and she's kept that streak alive with this book. I seriously adored Tyler and Paris as a couple, what with their back and forth making for some very lively and entertaining reading. There's a lot of humor here, but like I mentioned earlier, there's also heavier stuff going on, and I confess that my heart broke for these two. That being said, I don't want anyone to think that this is a depressing read because it isn't. Yes, there's angst--which make this angst addict extremely happy--but as a whole, this read made my heart feel lighter and brought quite a few smiles to my face. This enemies-to-lovers romance also reiterated what I already knew: that you can never go wrong with a Kim Karr book. Rewined receives 4.5 stars. ♥