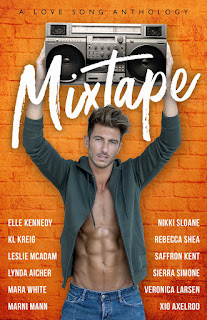 When I saw the great line-up of authors for this anthology, pre-ordering it was a no-brainer, and after breezing through it, I dare say that Mixtape was worth more than the 99 cents I paid for it. Inspired by love songs, the twelve authors--in order of the stories: Saffron A. Kent, Nikki Sloane, Sierra Simone, Elle Kennedy, Mara White, Xio Axelrod, Rebecca Shea, KL Kreig, Leslie McAdam, Veronica Larsen, Marni Mann, and Lynda Aicher, all of whom I've read at least once before--have compiled a good variety of romances, making for a wholly enjoyable reading experience. Add to that a foreword penned by Laurelin Paige, and this collection is one of the best I've come across in a long time, boasting of an all-star indie author line-up and some really stellar storytelling that left me satisfied.

My top three stories would have to be Elle Kennedy's Say Yes (inspired by "Always on My Mind" by Willie Nelson), Nikki Sloane's Say It First (inspired by "Say It First" by Sam Smith), and Sierra Simone's Broken Hallelujah (inspired by "Hallelujah" by Jeff Buckley). Kennedy's story had the most ingenious prologue and epilogue I've seen in forever and everything in between had me grinning and reminded of why I love this author's writing. Sloane--whose writing I only discovered by way of The Rivalry and The Doctor--had me in aww mode with the adorable tale of an actress on the rise and a promising NASCAR driver who were actually high school classmates. Simone's was darker and heavier in tone and feel, but it was a second-chance love story with a hint of BDSM that had my full attention. These three easily get five stars, each one feeling as if I did, indeed, get a complete story rather than left hanging.

The following stories get 4.5 stars: Guys My Age by Saffron A. Kent (inspired by "Guys My Age" by Hey Violet), Your Everything by KL Kreig (inspired by "I Just Want to Be Your Everything" by Andy Gibb), Lush by Marni Mann (inspired by "S+M" by Rihanna), Kiss Me by Lynda Aicher (inspired by "Kiss Me" by Ed Sheeran). Kent's story is actually a spin-off of sorts of her full-length novel Medicine Man but can still be read independently, featuring a friends-to-lovers tale with a twist since there's a fourteen-year difference between them. Kreig's novella serves as a prologue to her Black Swan Affair novel, and having been a fan of that, I loved this peek at the three main characters from years before. Mann definitely had me intrigued with a second-chance romance of sorts that has me wondering if it's the beginning of something more substantial later on. Aicher's is a step above the usual office romance, with main characters who need to clear the air before they finally act on their long-held mutual feelings.

Four stars go to each of the remaining stories: All I Want by Mara White (inspired by "All I Want to Do Is Make Love to You" by Heart), Toothpaste Kisses by Xio Axelrod (inspired by "Toothpaste Kisses" by The Maccabees), Wild Pitch by Rebecca Shea (inspired by "Thinking Out Loud" by Ed Sheeran), Think I'm in Love by Leslie McAdam (inspired by "Think I'm in Love" by Beck), and Moment of Truth by Veronica Larsen (inspired by "Say You Won't Let Go" by James Arthur). White's writing was fantastic with her story about love and fate, although I did find calling the son by his first two names all the time was strange. Axelrod's story was quite good and had a happy-for-now ending. Shea's was about a romance put on hold and I did like it even if it did feel rushed. McAdam's story is actually a prologue to her full-length Sombra, and while it felt a bit choppy at times, I did enjoy it. Larsen's friends-to-lovers was a good read as well, even if the whole forgotten drunken convo and the other guy ending up being the fiancé later on was a bit implausible. Taking all of the ratings into consideration, the Mixtape anthology averages 4.5 stars. ♥