Excerpt Reveal: In the Dog House by Traci Hall 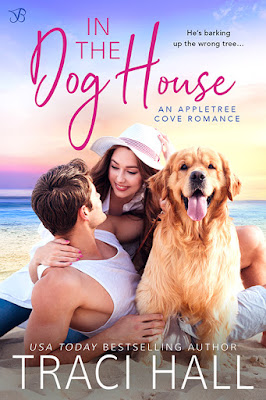 
About In the Dog House
Ten years ago, Jackson Hardy joined the Marines, leaving behind a woman he still dreams about. When he's called home to care for his ten-year-old nephew, no one is more shocked than he to run into Emma again. Or to still have those same feelings. But Jackson isn't looking for love, and neither is Emma, especially not with him. His precocious nephew, though, and a retriever named Bandit, are about to change that.

So what if Emma Mercer is an overachiever? She has plans to get her doctorate in psychology and create a no-kill shelter for the EST dogs she trains. Which leaves absolutely no time for romance. She's fine with a furry family—dogs don't teach you to love and then rip your heart to shreds. But young Matty's situation tugs at her heartstrings and there's no way she can't help him…and Jackson.

She may have hotter-than-ever chemistry with the soldier, but forgetting the past isn't easy.

Add In the Dog House on Goodreads. 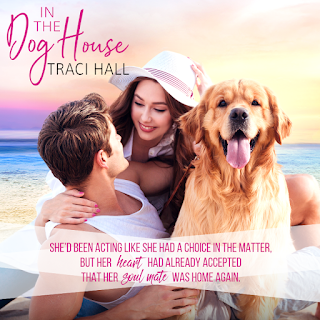 An Excerpt from In the Dog House
She’d said she was proud of him—did she mean it? Her forearm brushed his leg, and her throat turned a deep shade of rose as she held his gaze. Sweet. She wouldn’t say what she didn’t mean.

He tilted to the right, wanting to touch her mouth with his. Sample a quick taste of Emma to add to his memories. Her lips slightly parted, the pulse at the hollow of her throat sped, her eyes dilated. They were so close to a kiss that all he had to do was move his head forward…

She stood abruptly, smoothing the yellow fabric down over her hip with an eye toward Matty, racing around the fountain. “I’ll get dessert.”

Jackson snapped back. Was she inviting him inside?

She held the door open for him, and he followed her. The instant they were out of sight she launched herself at him, wrapping her arms around him to hold him tight—he couldn’t have broken free if he’d wanted to.

He buried his hands in her soft, soft hair and cupped her head so that he could study Emma and memorize each new line and freckle. He gently brought the pads of his thumbs to her smooth jaw and plump pink lower lip. Her eyes, swiped with copper, glittered sensually as she absorbed his touch. Auburn lashes at half-mast as she relaxed into him.

He dropped one arm to her hip to balance her, the other still cradling her head as he lowered his mouth. She lifted to him, their lips whispering across each other’s mouths before crashing together like surf against the sand.

She tasted different but the same. It was meeting his other half, something he’d been missing and suddenly needed more than his next breath.

“Jackson.” Her words were hot against his lips and brought the embers of desire flaming bright.

She entwined her fingers behind his neck and pressed in to him.

He clasped her tight, feeling the warmth of her feminine curves, the temptation she offered.

The smack of sneakers up the porch steps made them break away like guilty teenagers.

Em’s eyes flashed, the pulse at her neck fast as a hummingbird’s.

“Emma,” Matty asked, innocently entering the kitchen. “Can I have some lemonade?”

“Sure, hon. I was just getting the cannoli out. Are you ready for dessert?” Emma turned her back to him, and Jackson detected a tremor in her voice.

Jackson knew then that he’d never be over Emma Mercer, not if he lived to be a thousand.

With an impressive bibliography in an array of genres, USA Today bestselling author Traci Hall has garnered a notable fan base. She pens stories guaranteed to touch the heart while transporting the reader to another time and place. Her belief in happily ever after shines through, whether it's a romantic glimpse into history or a love affair for today.