Review: The Princess of Baker Street by Mia Kerick 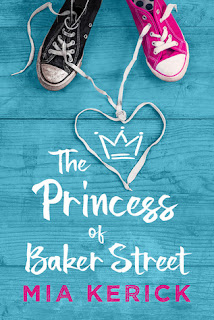 
Back then we had no clue life could get better. We had no hope anything would change. I was hungry and alone, and Shaylee was living a lie and being bullied by everybody. We both hit rock bottom. But we survived.

And here we are.

Times change, I guess. Life can get better.

I pass Shaylee a napkin, and she looks at me with the bluest eyes in Wild Acres, and after she pats her lips and chin so they’re dry, she smiles.

Mia Kerick is my go-to author when it comes to young adult LGBTQIA+ stories, and I dare say that The Princess of Baker Street is her best work to date. It's the story of two boys whose friendship undergoes challenges as they go from children to teenagers. Eric Sinclair has always been Joey Kinkaid's best friend--the Prince Eric to his best friend's Princess Ariel. Being assigned as a boy at birth doesn't stop Joey from expressing herself the way she wants to, and Eric was always there to be the support that Joey needed. And then they grew older, and peer pressure and not wanting to draw negative attention to himself has Eric shying away from his best friend. Maybe if Joey stopped wearing clothes and accessories that she shouldn't then the bullying would stop, but Joey has always been honest with herself; it's not her fault that there are those around her who have difficulty with it. But then the bullying amps up, and while Eric watches from the sidelines as Joey is tormented day in and day out in school, the unthinkable happens--Joey attempts to take her life. Will Joey finally stand up for her or will everything fall apart?

The Princess of Baker Street is one of those reads that just gets to you. I remember seeing a review that stated Joey was a guy who wanted to be a girl. No, Joey/Shaylee is transgender; it's not as if she was born one way and simply wanted to be another way. Joey/Shaylee was such a courageous character, and while Eric may have come off as taking the easy or cowardly way out by trying to cut ties with his best friend or later choosing to keep their friendship a secret, he shows his own brand of courage later on. It's heartbreaking that this fictional story is very much a reflection of real life. Bullying is going on in too many schools and the fact that young people can be so cruel as to make their peer believe there's no other way than to end up it all by taking their own life (or taking the lives of others). But this book is awe-inspiring, because the transformations aren't merely physical but in a far deeper manner. It's also a hopeful story and a reminder that love, acceptance, and respect do exist and that they can overcome hate in its various forms in the end. I highly recommend The Princess of Baker Street. Five-plus stars. ♥